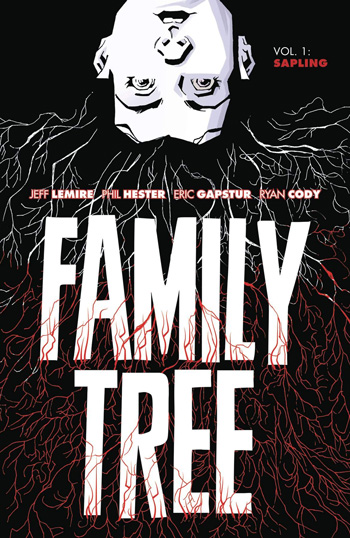 Jeff Lemire continues his string of hits with this book. He always has a new spin on some classic comic book themes in his stories. This time he is collaborating with artist Phil Hester, who is a fantastic artist.  Together, they have created one of the coolest new books of the last year.

The book starts with a woman named named Loretta. Loretta is a single mom with a lot of real life struggles. Lemire makes Loretta instantly identifiable.

Loretta is a well developed character and it shows on every page.

Loretta also has kids that she is trying to raise. Her daughter, Meg, gets a strange rash on her arm. Loretta also has to deal with her son Josh’s antics. While Loretta is doing in the middle of all of that, a mysterious old man shows up and gives Meg something.

That is when this book starts to get crazy.

Meg starts to turn into a tree. This puts the entire narrative into a spin. We get to see Loretta start to deal with some of the ramifications of Meg’s transformation. It also lets Lemire and Hester discuss what people in the world are really like in modern times.

People get wind of Meg’s transformation. Lemire shows the results pf that as people try to use Meg for their own purposes. Things do get dark. But it completely enthralling.

Lemire has done it again. He has written a smart and timely book. The art by Hester is perfect as well. This is only the first volume so there will be more to this comic than just this. I can’t wait to see where we end up.