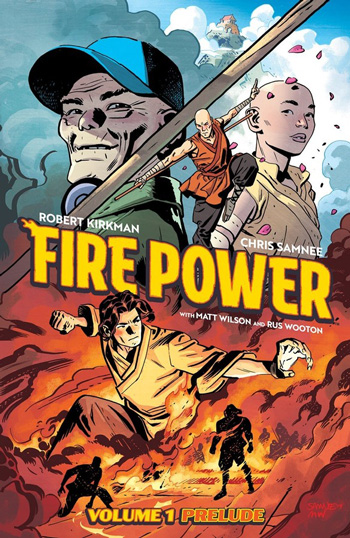 I have always seemed to enjoy Robert Kirkman’s writing more when he isn’t writing The Walking Dead. That series was indeed great, but i feel that is all people associate his writing with. He has written a lot more comics than just that one.

Firepower is one of those comics. It is full of action and it is just a heck of a lot of fun.

The book starts out with an introduction to our main character named Owen Johnson.

We first get to see Johnson climbing a mountain in China. He is trying to get to the Shaolin Temple. It is a pretty harrowing opening.

Kirkman lets artist Chris Samnee tell the story without words for the opening. It is the best part of the book. Samnee demonstrates Johnson’s struggle to get up the mountain perfectly and honestly. You can’t ask for a better beginning. Samnee is one of the best artists currently working and he proves that again here.

When Johnson is just about ready to pass out, he makes it to the Temple. But Master Lun is curious as to why Johnson is there. The two of them have a fight. Lun allows Johnson to stay.

And that is the setup of the entire book.

The story is basically about Lun training Johnson from that point on. We get to see a lot of fun scenes. There are a few surprises along the way as the training continues. Johnson eventually becomes the person he wanted to be.

Through it all, Kirkman and Samnee work beautifully together. The writing is focused and taut. The art is full of great designs and excellent storytelling. It all leads to a new series following this book.

At the end of the day, Fire Power ends up being a well written, well drawn, and emotionally resonant story. Thumbs up.