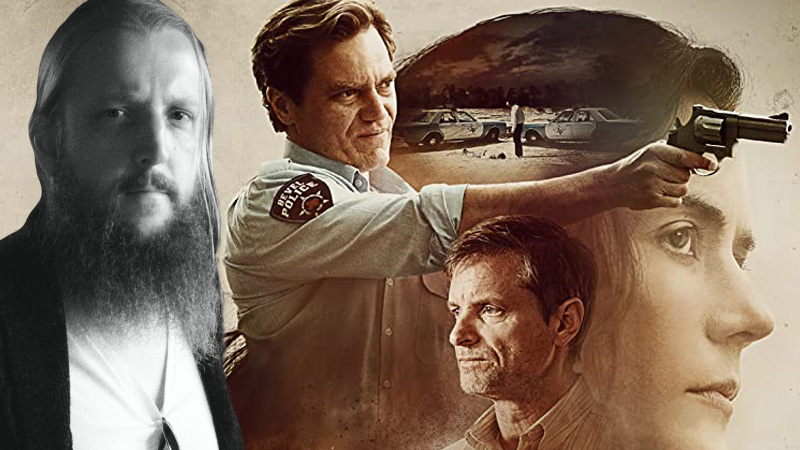 FOG! recently chatted with writer/director Scott Teems about his new movie, The Quarry. The film was originally going to debut at SXSW, but is now streaming on Video on Demand.

It reunites Boardwalk Empire stars Shea Whigham (in his first lead role) and MIchael Shannon as, respectively, the new priest arriving in a small Texas town and the town’s jaded sheriff.

Except Whigham’s character — who has no name, in the tradition of spaghetti westerns and neo-noirs — is a criminal on the run who’s murdered the priest who’d befriended him and taken his place. When the body turns up, it’s a matter of time before it becomes linked to him. Meanwhile, the local parishioners find his lowkey style and humility refreshingly welcome. The question becomes whether he’ll be found out, and whether his new persona will help atone for his past sins.

It’s a noirish character study that affords Whigham — a terrific supporting player in The Wolf of Wall Street, Take Shelter, Kong: Skull Island and TV series including True Detective and Fargo — a chance to shine.

Teems also talked about The Quarry’s similarities to his series Rectify and the upcoming Halloween Kills, for which he wrote the script.

FOG!: First of all, how are you doing during this lockdown?

Scott Teems: Okay, thanks. All things considered, I’m all right.

That’s good. How disappointed were you that this didn’t get to play at SXSW?

Obviously, it’s a disappointment and you want the festival experience and the chance to be in that community. But we’re all suffering the loss of the film community, right now, at least in the physical world. At the same time, we thought it was important to put the movie out anyway. And so once you get over the initial sting of losing that festival mirror, it’s so much more than the movie playing. It’s the experience, the celebration of it, and that’s a loss for sure.

Once you get over that, you realize this is an opportunity. People need stories. To be able to put a new story into the world during this troubled time is something that I’m excited about and. It took me a minute to come around to it, but I’m excited about the idea and hope it’ll get in front of some people this way.

Hopefully more people will get a chance to see it this way. Who came on first, Michael Shannon or Shea Whigham?

Well, it’s funny, because I wrote this script about 10 years ago. I’d made a movie called That Evening Sun, which premiered at South By also. Right after that, I was looking for my next project and I stumbled across this book and wrote this script, back in 2010.

One of the first people I went to was Mike Shannon. This must have been 2011 or 2012. He was off making Man of Steel, that’s how long ago it was. So he was unavailable. That iteration of the movie didn’t happen.

Cut to 10 years later and Shea got his hands on the script through one of my producers, Kristin Mann, and his brother, Jack who’s an agent at CAA, and he got excited about it. And that brought the project back to life. The beautiful thing is because Shea and Mike are old friends, we were able to bring Mike back into the fold after Shea came on. So it kind of came full circle. I went to Mike first, but it was Shea who came on first, 10 years later. 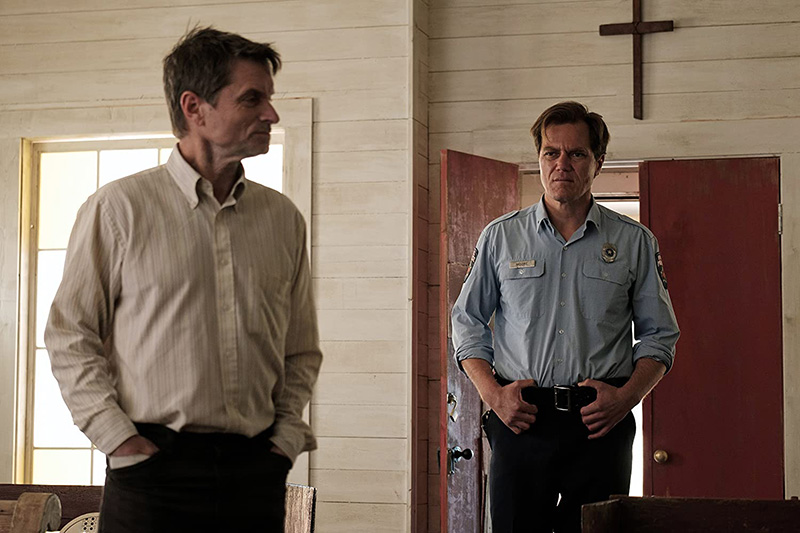 Was Mike going to play The Man?

No, I’d gone to him for the Chief back then too. I always saw him as the guy… he popped into my head when I wrote this script. My favorite Mike Shannon performances tend to be the ones where he’s able to be charming, show a little more warmth and not just play a villain. I love his work with Jeff Nichols. Jeff has always been able to bring out a warmer side of Mike that sometimes in the bigger roles he doesn’t get to do.

And I love that charming version of him. I always saw the Chief as somebody we really needed to struggle with our feelings about. All these characters have light and dark shades. Our feelings about them hopefully evolve and change. That requires great actors and I was fortunate in that regard.

Is this Shea’s first leading role?

I think so. I was really excited to give him that opportunity. He’s long been one of my favorite actors. He’s great in everything and he’s a chameleon. And that way, he actually became the perfect person to play this character, because the character’s sort of a cipher. He’s literally the man with no name. Shea just had the ability to really disappear into roles. That was really crucial for this film.

He is kind of an existential character. We never learn his name – at one point he just says “My name is sinner.” Curious if you ever saw the Bogart film The Left Hand of God in which he impersonates a dead priest.

No, I’ve never seen that one. But there are many films, like The Night of the Hunter, and the Clint Eastwood westerns where a stranger shows up in town. The scenario has been well-trod. What I like about this one is it was sort of a different take on that. More existential, like you said, and less about who is this guy and what does he do. It’s more like, what does that do to a person? What does it mean to carry that guilt and the weight of conscience?

Those more existential questions were what drew me to the story.

In between writing the script and making this movie, you created the show Rectify, which has some similar themes. What draws you to tales of redemption? And do you consider The Quarry to be a story of redemption?

That’s a good question. I grew up in Georgia and when you come from The South, religion is part of the culture and much more sort of obligatory than it is in other places. So as I grew up, it was part of my life. As I became an adult, I wrestled with my relationship to that and what it meant to me. 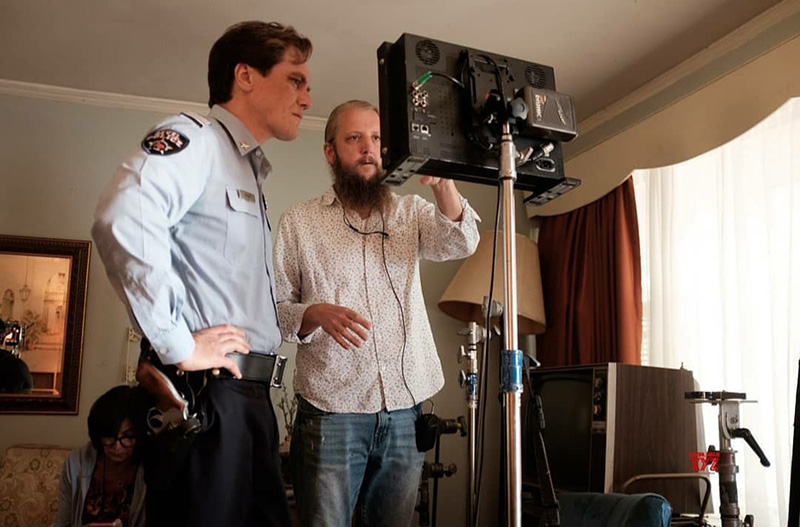 As a result, I’ve always been drawn to stories about men, violence, The South, religion and where those ideas collide. This provided an opportunity to explore that. Whether it’s a story of redemption is a question, that’s sort of the question of the movie and the question I try to leave for the audience. If the audience wrestles with that and thinks about it and tries to understand exactly what transpires in this movie, then that’s my biggest hope.

All I can hope for as a storyteller is that you have something to walk away and grapple with. If you even consider grappling with it, then I’ve done my job.

What did you change from the novel? Mike Shannon has some great lines like, “You’re not a big smiler, are you?” and then when he sees the blood on the shirt from the Man’s van, he says, “That guy’s either dead or extremely fuckin’ injured.” Were any of those in the novel?

Those were not. I love the book. It’s brilliant. But it’s very serious. It doesn’t have a ton of levity. It has some, but in different ways. I sort of pared down the characters, so I needed to find moments of levity. I wanted to make the Chief somebody that you kind of like and you kind of hate that you like him, because he’s smart and charming, but he’s also blind to his own prejudices. But that’s the struggle.

The book is actually set in South Africa. It was written in 1995, so it deals with racial injustice in the period coming out of Apartheid. And it had these ideas: Men, violence, religion and that “stranger rolls into town” premise makes it a universal idea. It allows it to be translated to different settings, locations and milieus. I felt like it would be a great story to tell and put my spin on and take it to the States.

The arid plains in the novel felt like Texas to me and a small town, this could happen there, it felt like. And, of course, racial injustice and conflict is unfortunately not relegated to South Africa. It’s everywhere and we have our own version of that. The sad irony, I guess, is that in the 10 years since I first wrote this script, it’s only become more relevant.

The basic story is the same: The setup, the characters — the man, the sheriff, the woman at the house and the two boys. Those are all the characters from the novel. I just Americanized it.

It’s hard to imagine anyone but Michael Shannon saying those lines.

The “big smiler” line came out of prep. Once you have your actors in place, you go through this script again — at least I do — and start shaping the role to the actor a little more. Knowing that he can deliver a line like that, I sort of looked for places to insert a little more levity here and there. That was one of those moments that just popped up. And he nailed it. It’s great.

Did you have a conversation about the novelist, Damon Galgut, about the changes you were making in bringing this to the screen?

Yeah. He’s been a huge support this whole time. We’ve been emailing and corresponding for 10 years now. Early on, I would send him drafts of the script. I’ve adapted several works — novels, short stories, comic books — and every author is different. Some are really interested in the process and they want to be hands-on and they understand that it’s going to change and become something different.

Some don’t want anything to do with it. But Damon was very open. And he knew I was going to change it, because I had to, to Americanize it. But he’s really good about helping guide me toward the bigger themes of the story. I believe that’s my obligation as an adapter is to be true to the author’s intent and their themes.

You can change the details, if you’re hitting the bigger target. That’s my goal, and he helped me stay true to the course, hopefully.

You’re also working on Halloween Kills, which is obviously a much different kind of project. What’s the status: Is that on hold now?

It was exciting to work on something that’s very different and that allowed me to stretch some new muscles. I’ve known [director] David [Gordon Green] for a long time and so to work with him is something that was a nice change of pace. I’m excited for folks to see it.