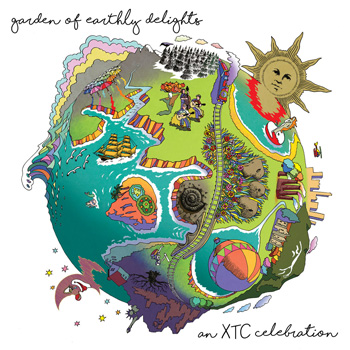 I’m going to be totally transparent here: I don’t care for tribute albums.

I don’t care for covers albums in general. I don’t know why.

Maybe when I was a kid, I accidentally stepped on a nail while hearing Jim Nabors sing a version of “You Are The Sunshine Of My Life” and it turned me off of cover versions and tribute for the next 45+ years. I mean, you don’t even have to experience that kind of pain to realize how it could possibly mess somebody up, right?

I mean, I don’t know if that actually happened but it would explain some things…

So, let’s talk about GARDEN OF EARTHLY DELIGHTS: AN XTC CELEBRATION, a new two CD tribute album available on Futureman Records. I like Futureman Records. Keith Klingensmith is a cool cat. He’s been involved in some fine bands including the heart-melting super trio The Legal Matters.

Not just Power Pop but in lovable melodic Pop that would inspire any listener to invest in a bouncy house and spend all day in it while listening to nothing but Futureman releases.

So, I trust Keith and his label.

And what about XTC?

I first got into XTC back in 1979 and was a hardcore fan of everything they released up through 1982’s ENGLISH SETTLEMENT album. After that, I only ‘liked’ them. Maybe because I think that drummer Terry Chambers’ departure in ’83 or so changed the dynamic of the band’s sound (sound familiar, R.E.M. fans?). Now, I do believe that Andy Partridge and Colin Moulding remained excellent songwriters and Dave Gregory brought wonderful ideas to their recordings, but something was missing.

Perhaps that missing element was the excitement of the band’s earlier recordings, which seemed more dangerous, more experimental, and most definitely challenging on first listen. I don’t know why I lost my fascination and passion for their music in the second half of their career. Maybe I stepped on a nail while listening to Jim Nabors when I was a teen…

So, what do I think of a type of album (tribute) that I rarely listen to paying homage to a band that I lost my passion for a handful of years into their career? To be honest, I’m a bit disappointed. But not in GARDEN OF EARTHLY DELIGHTS, which literally lives up to its title. I’m actually disappointed that I have avoided tribute albums for so long! Most of the artists retain the ‘feel’ of the original while reshaping the songs into something new and unique.

Now, don’t get me wrong – nearly everything on this release is pretty fantastic and each artist should feel proud that they not only did XTC proud but they also will inspire listeners to seek out their original material. Sure, there are a couple tracks that I will probably never listen to again, but I prefer to accentuate the positive here, folks.

The only real negative that I wanted to address is that, for the most part, the artists tend to focus on XTC’s post-1982 recordings and NOT the five early albums that established the band as a musical force to be reckoned with. But that is just the thoughts of a music geek. Move along, nothing to see here.

GARDEN OF EARTHLY DELIGHTS has inspired me to give some – and I stress ‘some’ – tribute albums a chance. It makes me realize that I may have missed some real gems along the way…

I blame that nail and I blame Jim Nabors. Bastards.