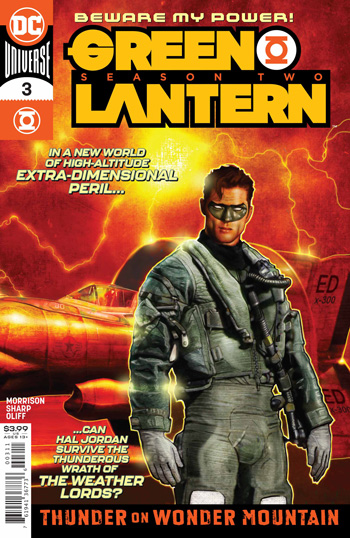 Anytime Grant Morrison writes something, it is a must read book. This comic is no different. Together with artist Liam Sharp, Morrison creates one of the most memorable takes on Green Lantern of all time.

This is Hal Jordan as you have never seen him before and I cannot get enough of it.

The opening pages have Hal Jordan on Earth meeting up with some strange manner of creature. I love that Morrison has put Hal on Earth.

It has surprisingly really opened up this book and this character.

The opening is funny and well done. Hal visits his friend Shane in the hospital. He wants Shane to tell him about a special jet that is out there. Hal is curious about this jet for some reason.

So, he goes to see this jet called the X-300 Teleport Plane.

Of course Hal takes this plane and pilots it on a tour of insanity. Things get crazy as they usually do in a comic book written by Grant Morrison. This one is no exception.

Things get pretty wild as Hal flies the plane and I completely loved it. This is a comic book unlike any other!

Artist Liam Sharp does one hell of a draw drawing this. He draws stuff that I have never seen in a comic book before. This is one hell of a collaboration between the two creators and I, for one, think it might be the best Green Lantern title has been in a long, long time.