And has been directed by Sydney Pollack, Otto Preminger, Dario Argento, David Cronenberg, and Robert Rodriguez?

As well as appeared on television shows written by Gene Roddenberry, Rod Serling, and Quentin Tarantino?

I’ll give you a hint, it’s not Kevin Bacon, although you can link them in two degrees.

The answer is John Saxon. 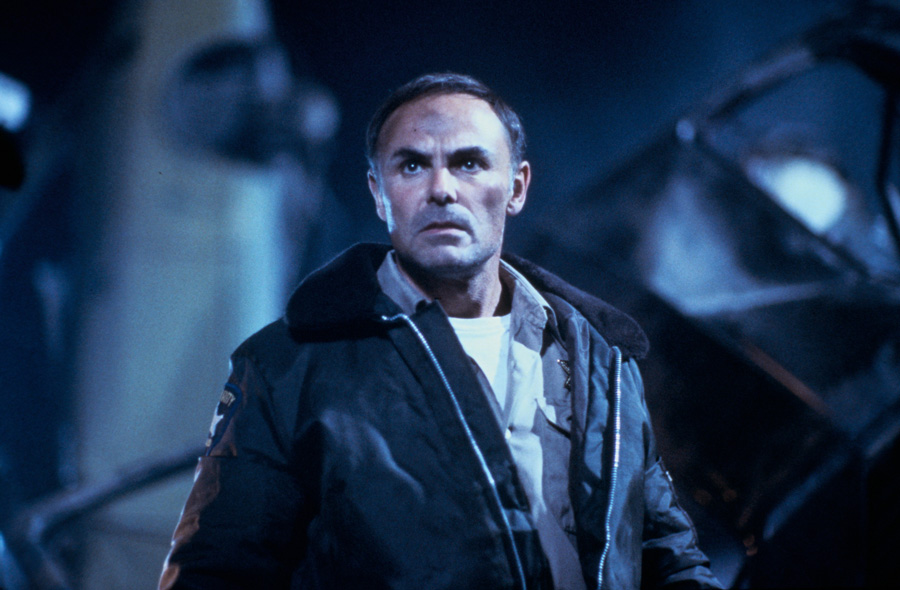 John Saxon has been acting onscreen for seven decades now.

His presence in a film usually means he’s there to save the day, or ruin it. Saxon’s talents have graced everything from serious dramas, comedies, westerns, horror flicks, sci-fi, episodic television, Eurocrime, Blaxploitation, Canuxploitation, and of course, Kung Fu features. In terms of characters played, there is almost too many to mention, but to name a few: Nazis, Arab princes, Israeli commandos, greedy corporate bosses, serial killing soldiers, Mexican revolutionaries, Native Americans, Vietnam veterans, and a whole lot of cops.

Saxon, born Carmine Orrico in Brooklyn back in 1935, is perhaps the most prolific character actor still working today. If you could attribute one word to John Saxon it would be badass. What else would you call someone with his resume who also speaks fluent Italian and holds a black belt in karate? His handsome features, athletic build, and martial arts dexterity has kept him looking relatively ageless for most of his career.

Saxon began his career studying acting with the legendary Stella Adler before becoming a contract player for Universal Pictures at seventeen back in the early 1950s. After beginning his career starring alongside leading ladies like Lana Turner, Sandra Dee, and Audrey Hepburn, his career transitioned into more character parts.

Some would describe Saxon as a genre actor due to his major contributions to both horror and science fiction films. Saxon appeared as a cop in both Black Christmas, 1974, (the Canadian horror film widely considered the birth of the slasher film) and the original Nightmare on Elm Street, 1984, (with a young Johnny Depp in an early role) and many of its sequels. 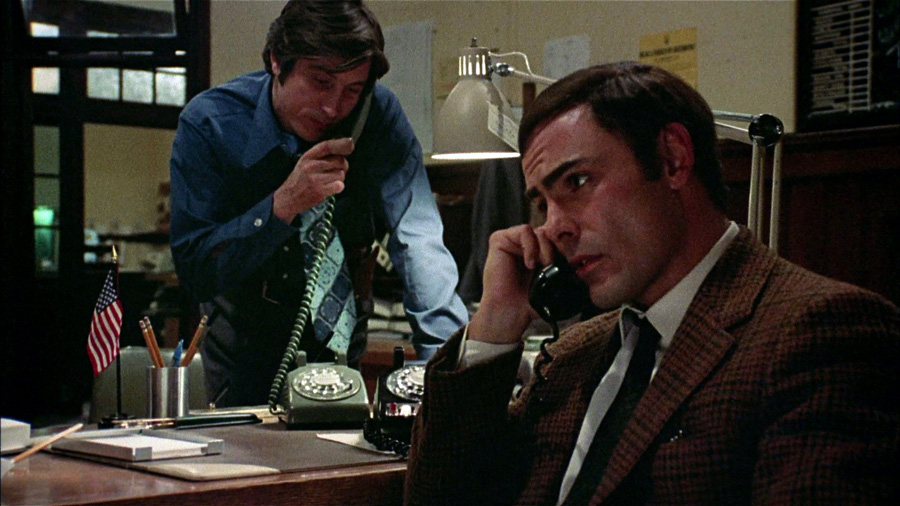 Saxon has lent his talent to many genre TV shows as well, including Six Million Dollar Man, The Bionic Woman, Night Gallery, and Wonder Woman. He was also cast as the lead in the Gene Roddenberry second failed follow up to Star Trek, Planet Earth.

But of all the performances Saxon has given throughout the years his very best is largely forgotten.

War Hunt, 1962, is a little-known movie about a group of soldiers in the Korean War. One of the reasons this movie stands out, besides being about Korea, is it’s one of the first films to show soldiers enjoying killing. Here Saxon plays Pvt. Raymond Endore, a psychopathic killer who is living his best life as a soldier during war. With a captain who seemingly approves of his behavior, all is well, until a wide-eyed Pvt. Roy Loomis arrives challenging Endore’s methods. Loomis, played in his big screen debut by Robert Redford, is the personification of good to Saxon’s evil. 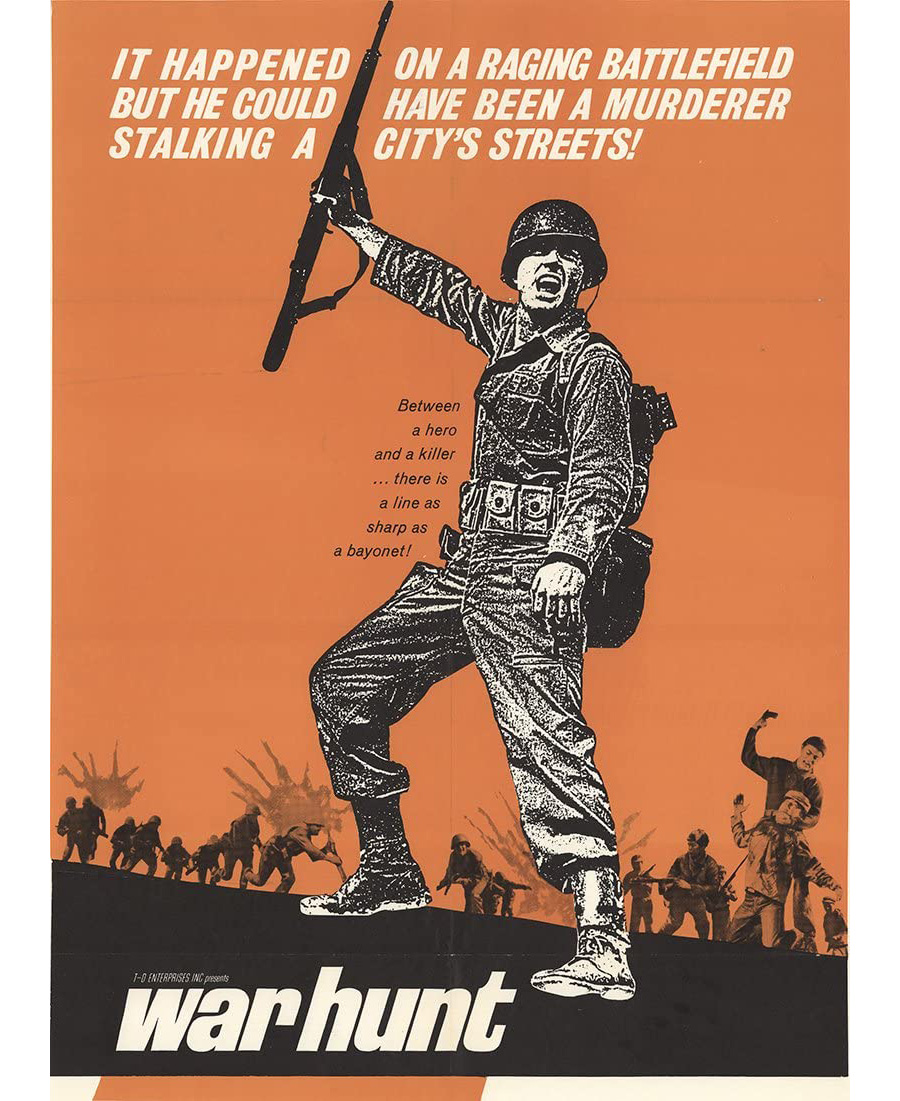 War Hunt is one of those Rosetta Stone like films rife with cinema history. In addition to being Redford’s screen debut, it’s also the debut for both Tom Skeritt (Alien), and as an actor, Sydney Pollack (who would later go on to direct both Redford and Saxon in The Electric Horseman). Other actors in War Hunt include Gavin McCloud, later of Love Boat fame, and in a non-speaking role as a Jeep driver, Francis Ford Coppola. This makes three actors who would later go on to win the Academy Award for Best Director: Coppola for The Godfather Part II, Redford for Ordinary People, and Pollack for Out of Africa.

But despite all the cool film trivia in War Hunt, this movie is held up by Saxon’s wonderful performance as Endore. Saxon’s calm methodical crazy is reminiscent of Brando’s Colonel Kurtz in Coppola’s Apocalypse Now. I would go so far to say it seems Brando lifts heavily from Saxon’s performance in this film for his strikingly similar part as Colonel Kurtz. 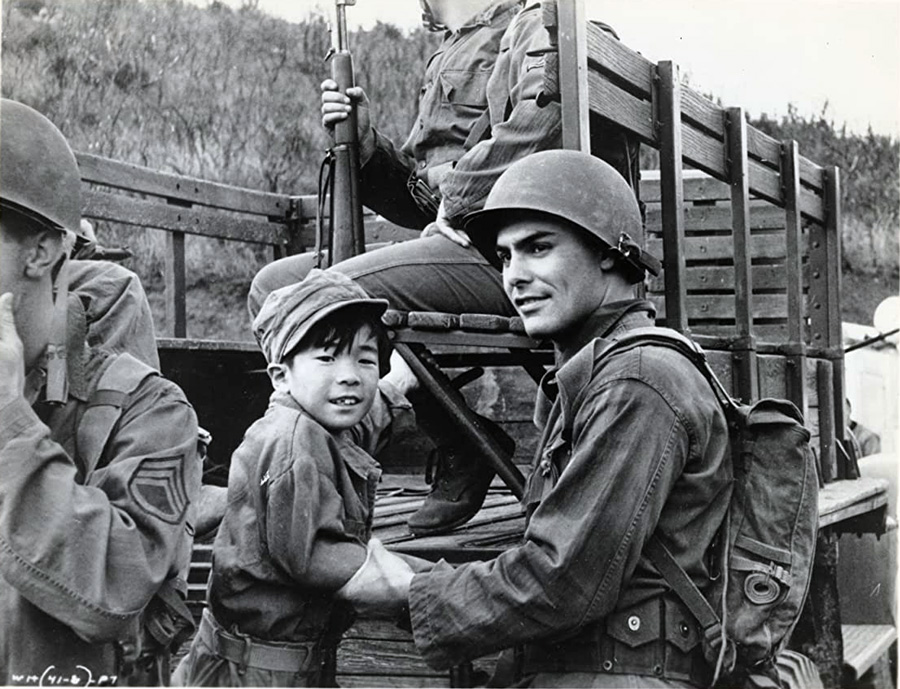 Although Saxon never became a household name in the same way so many of his co-stars did, it never dampened his enthusiasm for the work. For as good as Saxon has been in so many genres it’s fair to say he has also been in some truly awful films. Some films were so bad, they’re good. To name a few: Cannibal Apocalypse, Blood Beach, Hands of Steel, The Bees, My Mom’s a Werewolf, and Zombie Death House.

Interesting side note; Zombie Death House remains to date the only movie John Saxon ever directed. Legend has it, Saxon stepped in as director at the last minute when the original director left the project. While Zombie Death House is not a good film, it only builds more credibility for Saxon when you discover it was shot in 23 days.

In addition to film, Saxon made an indelible mark on television throughout many decades. Before there was the prestige television of paid cable, shows like Gunsmoke, Bonanza, The Rockford Files, The Streets of San Francisco, The Mary Tyler Moore Show, Starsky and Hutch, Quincy M.E., Hawaii Five-O, Fantasy Island, Dynasty, Falcon Crest, Murder She Wrote, and Melrose Place, were all considered must see TV. Saxon appeared on all of them, many times in recurring roles. I think the best TV accolade Saxon can tout is he appeared on both the original Kung Fu as well as the Kung Fu the Legend Continues over two decades later. In recent years, he appeared on a 2005 episode of CSI that was written and directed by Quentin Tarantino.

But of all the things Saxon has done in his career there is one film experience that will follow him forever. 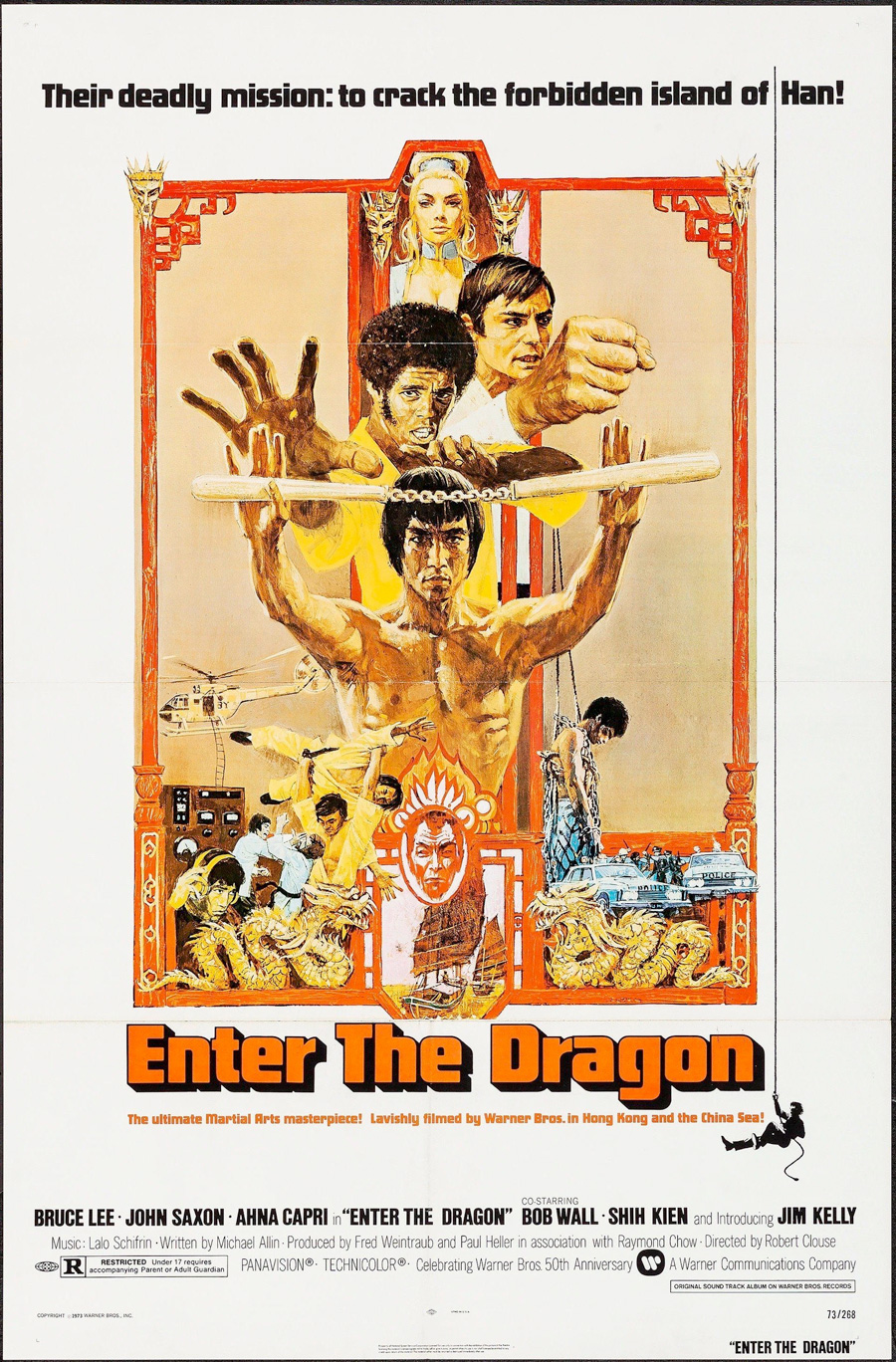 Enter the Dragon is widely considered the greatest Kung Fu film of all time. Even people who don’t know the movie know its star Bruce Lee. Nearly fifty years after his passing, Bruce Lee’s legacy lives on. Along with Jim Kelly (one of the first black martial artists to become a movie star), Saxon’s character Roper is invited to Han’s island for a martial arts tournament the likes of which the world had never seen before.

Before Enter the Dragon, martial arts films were mostly low budget affairs, but this changed everything. With its big budget, and bigger than life cast, Enter the Dragon promised to be a launching pad for even greater international fame for Bruce Lee and company. Sadly, Lee would die soon after the films completion leaving behind a void never truly filled in the martial arts world.

Saxon speaks fondly of his time with Lee and rarely does a day go by where someone doesn’t ask him about working with him. 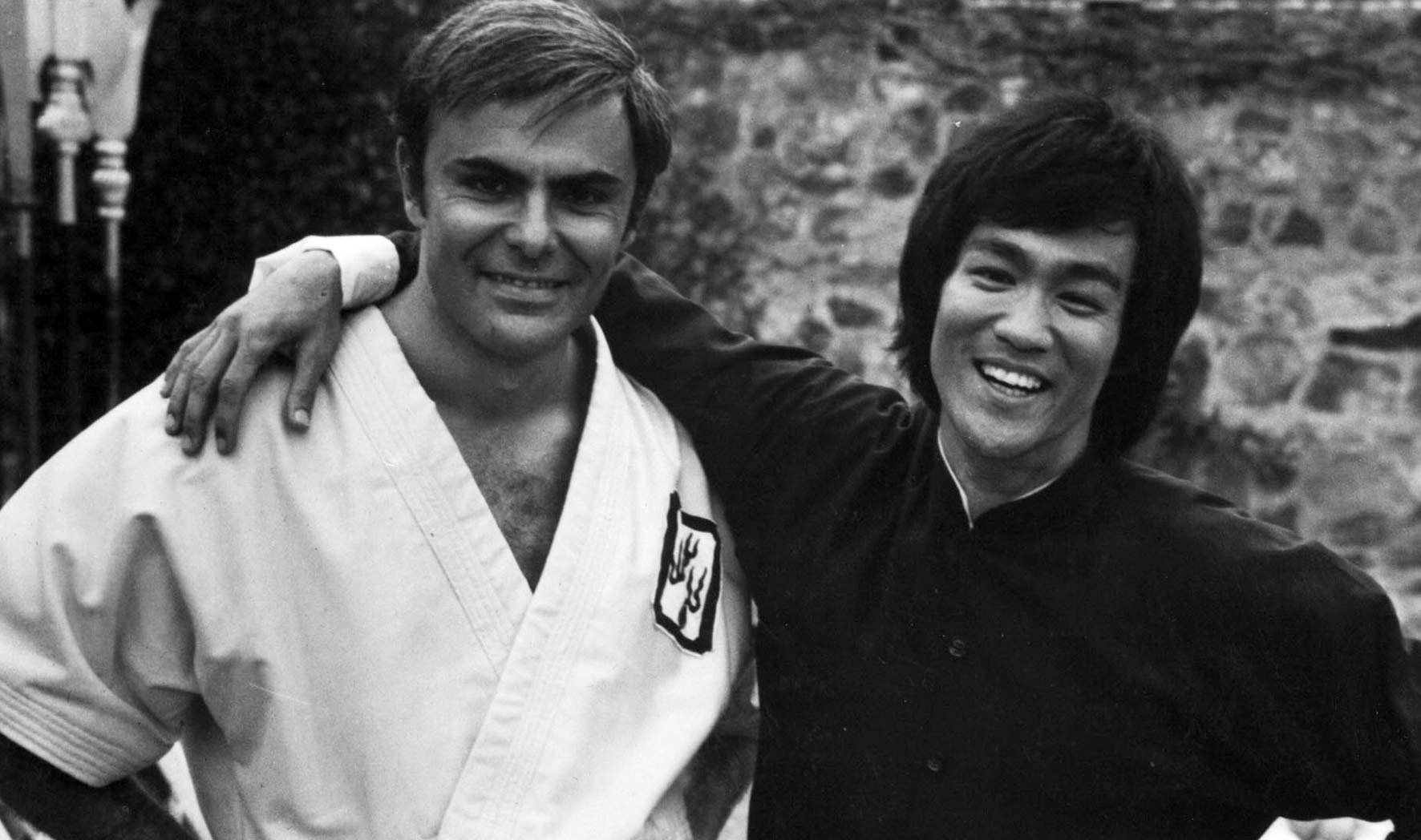 Photo courtesy of Columbus Association for the Performing Arts

Although John Saxon is now in his eighties, he’s shown no signs of stopping anytime soon. According to IMDb he has two movies in production with hopefully many more to come. War Hunt is available on DVD and is often featured on TCM. It is also available as streaming rental on Amazon Prime. I highly recommend it, and hope it inspires you seek out more of his great work.

Fred Shahadi is a filmmaker/writer/producer living in Los Angeles. He is the author of the JFK conspiracy cult sci-fi novel Shoot the Moon.