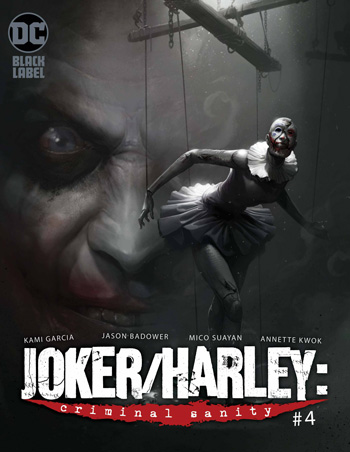 This book was already feeling a bit long in the tooth even before the coronavirus shut everything down.

We start off the issue at the GCPD.

An interrogation happens. Harley interrogates a prisoner. It is a fairly dull scene that doesn’t move the narrative at all. It is meant to be terrifying for sure. But honestly? I found it a bit laughable. It could have been so much better. But it falls flat.

Harley Quinn is getting closer and closer to the truth.

We get to see her running around for most of the issue. Basically, the story goes from scene to scene with diminishing results. The plot is rather threadbare and it shows on each passing page.

The whole book is angled towards the cliffhanger ending. The problem is, by the end of the book, the story really hasn’t advanced much at all. We are at the same place that we started at. And it is very noticeable.

The artwork is the best part, especially from Mico Suayan. He is a truly talented artist. (Badower isn’t half bad either. But besides the art?

There is not much else. Hopefully Garcia has something big planned. Right now this book is lacking.