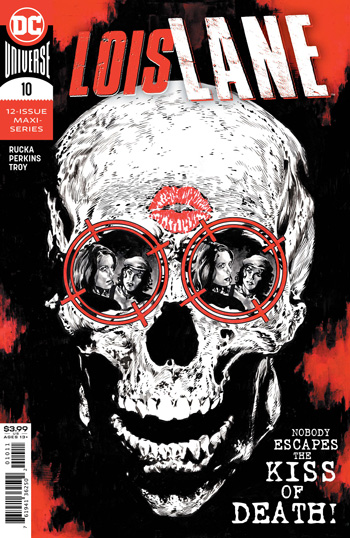 This is the first comic book I’ve read since DC started releasing their books, again, and boy does it feel good!

Lois Lane goes into recap mode while expanding its horizons before moving on to the main course of affairs.

A heartfelt moment between Lois and her beau “Smallville,” reminds the reader that Superman is no good against magic, which is a real bummer since a magical assassin name The Kiss of Death has a bullet Lois’ name on it.

Later, we check in with Renee Montoya guarding Sister Clarice and Lois’ secret weapon in the form of Checkmate agent Jessica Midnight.

However, Jessica believes she is anything but a silent killer and wonders why Lois is so sure of her occupation. It was easy to believe Jessica was lying because, well, she’s a spy, right?

The whole is she or isn’t she plot point in the last few issues culminates here. I’m not going to spoil the specific here, but the answer lies in the MULTIVERSE!!!

Montoya gives Jessica a history lesson about the multiverse, which is told with some beautiful artwork by Mike Perkins. The imagery of different versions of heroes, timelines, and worlds flows wonderfully with Montoya’s narration.

The truth serves as a powerful weapon for Jessica and the reader.

On one front, Jessica is in complete shock. On the other front, Montoya reveals or reminds the reader about the current continuity of the DC Universe. There were a couple of things I forgot about until they were mentioned. Some might find it confusing, but without going into specifics, Montoya hit the bullseye on all of it.

Kiss of Death strikes in the third act as Lois’ trap doesn’t go according to plan. Rucka made it all come together in a suspenseful manner, setting up next month’s penultimate chapter in grand fashion.