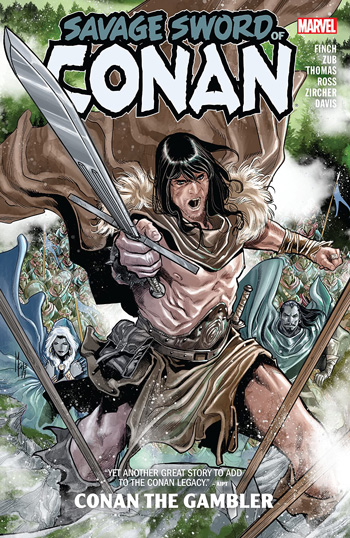 With the new version of this legendary comic, Marvel managed to leave its fans pleasantly surprised yet again.

The latest trade paperback, based on the stories by Robert E. Howard is out now and features three distinct stories, all full of unpredictable plot twists and endless excitement.

Everything about this comic is classic Conan storytelling, from the opening scene in a dark casino to the gladiator fights.

And this comic features a perfect amount of violence for it to still be true to the story but full of anticipation at the same time.

One thing that stands out about the latest comic is the awesome cover art and the graphics which will make old school Sword of Conan fans very happy.

This is because the graphics of this comic, including the main character himself, are very reminiscent of the original issues.

This compliments Meredith Finch’s storytelling really well. They didn’t forget to make the cover strong enough for any Conan novel either. This is why David Finch and Frank D’Armata joined forces and delivered an exciting, eye-catching cover that portrays everything a reader should expect from this comic: the intensity, unique plots, and high-quality themes.

The story begins with a shot of Conan in a dark bar, who has been drugged and hasn’t fully recovered from getting poisoned. And now, he has to navigate through the foggy world of ‘civilized’ gambling in this state. He has to play games that are just like the ones in real money casino. They are full of backstabbing and unexpected turns. The thing that really stands out here is that Conan, left with no weapons and strength has to hold onto his dear life and there actually is a chance of him losing the battle, which is not something we see often with this character.

Even though it might seem impossible to make a card game as exciting as a hand in hand battle, the writers managed to exceed at doing this as well. They leave readers with no other choice than to hold on to the edges of their seats as Conan faces a brand new challenge.

But this doesn’t mean there are no physical battles. After the opening sequence, Conan faces many seemingly stronger enemies but manages to fight them off in a classic Conan style. The violence is very high octane and impossible to take your eyes off of.

Following this adventure is a two-part story by Roy Thomas and Alan Davis, Dark Cavern, Dark Crystal. Roy is a master at portraying this character, providing fun twists that organically bring more depth to our already well-known character.

In this story, they have Conan on the road paid to protect a mysterious woman who is looking for treasure. Along the way, they stumble across some complications like getting captured by the mountain people. Soon enough, Conan will be parlaying with an army of barbaric types, fighting off monsters, and trying to avoid getting stabbed in the back. And after having gone through all of this he discovers, that the treasure is actually way darker than he thought.

The latest comic of this iconic series captures everything you could ever want in a story about this great hero. This goes for all three complete stories by different teams. It does so by showing Conan’s versatility and definitely exceeding all the expectations one might have had about the next chilling adventures of this legendary Marvel character.