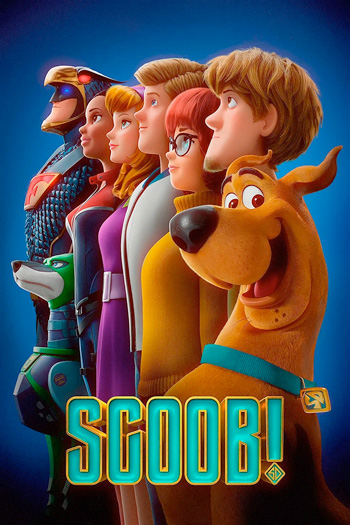 In a time when we are starved for new content, especially for kids, nothing is more comforting than nostalgia. For anyone ages 5 to 50, Scooby-Doo is more than simply familiar, it’s beloved. Having grown up with the original Scooby-Doo cartoon reruns, then rediscovering them all over again with my own kids, I was more than excited to review Scoob!

This is why it’s with a heavy heart that I must say that it’s a disappointment.

Scoob! starts off with the best intentions, beginning with the story of how the Mystery Incorporated gang first gets together as kids. We follow Shaggy, a lonely kid who doesn’t quite fit in, until he meets a stray mutt who becomes his best friend. Shaggy’s relationship with Scooby begins a lifelong friendship based on mutual love of food, fun, and fear. Along with trusted friends Fred, Velma, and Daphne, the gang begins a journey into investigating the paranormal, foiling villainous plots, and earning their title of “meddling kids.”

The original show’s opening credits and song are celebrated with new animation. This nostalgic nod is fun for fans of all ages. What follows is the usual Scooby-Doo-type tale complete with celebrity cameos (Simon Cowell), cartoon cameos (Blue Falcon and Captain Caveman), and a spectacular time-bending confrontation with the spirit of a giant, mythological, three-headed dog.

As a film, the story is fine. It’s not any better or worse than most Scooby-Doo stories. However, Scoob! is a cautionary tale of what happens when Hollywood tries to fix something that isn’t broken. Reinvention can be rewarding when executed to perfection. But why reinvent a franchise that people already love?

Obviously with the deaths of Casey Kasem in 2014 and Don Messick in 1997, suitable replacements were needed for the voices of Shaggy and Scooby. In Scooby’s case, producers went in-house using Frank Welker who normally voiced Fred. Welker’s Scooby is a wonderful homage to Messick’s original creation from someone who knew him well. Welker continued to voice Fred in nearly every incarnation of Scooby-Doo – that is, until Scoob! Although the movie wisely uses Welker as Scooby, the role of Fred instead went to Zac Efron. Similarly, when Kasem died audiences grew to accept Matthew Lillard, who played Shaggy in both live-action Scooby-Doo films, as the new voice of Shaggy. But not in Scoob! That honor now belongs to Will Forte.

The rest of the cast is also rounded out with bigger name stars including Amanda Seyfried as Daphne, Gina Rodriguez as Velma, and Mark Wahlberg making his voice acting debut as the Blue Falcon.

Big name stars in animated films is nothing new, but replacing quality voice-over actors who are still alive, is. If Frank Welker has been doing the voice of Fred for nearly fifty years why replace him, especially if he’s already playing Scooby? Why replace Matthew Lillard when audiences have accepted his own take on Shaggy for several decades now?

For his own part, Lillard was vocal about losing the role he has helped define, describing it as both a “drag” and “a bummer.” He’s right, it is. Part of what makes the animated world so wonderful is that people love the familiarity of the voices brought to life. Can you imagine if they decided to make a new Simpsons movie but recast Homer with Ben Affleck, or Bart with Justin Bieber? It’s not that the voice acting in Scoob! is bad, but it’s different enough to be off-putting when it simply didn’t need to be.

Despite his disappointment, Matthew Lillard sent out a classy tweet of support, wishing the movie well. And it may have done the trick. Scoob! enjoyed a big opening weekend as a digital release earning the number one spot on VOD. I hope the producers will see the value of familiar-sounding voices of beloved characters in future incarnations of the franchise we all love.

Scoob! is now available for rental or purchase On Demand and Digital HD.

Fred Shahadi is a filmmaker/writer/producer living in Los Angeles.
He is the author of the JFK conspiracy cult sci-fi novel, Shoot the Moon.