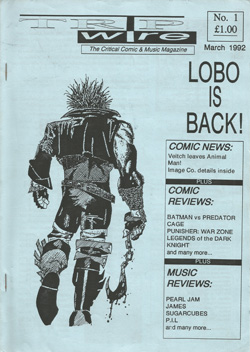 Tripwire started way back in February 1992 as a black and white fanzine, covering comics and music.

We were still finding our feet when we began but we got to interview Peter Milligan, plus we covered the beginnings of DC’s Vertigo imprint. Tripwire was a big supporter of Vertigo, championing the likes of Frank Quitely, Grant Morrison, Sean Phillips and Steve Yeowell.

We moved to a full colour cover in Spring 1997, our fifth anniversary issue which was graced with a Frank Quitely 2020 Visions cover.

We dropped the music in 1999 and replaced it with film and TV, which was a much better fit.

Between 1992 and 2013, we published 55 regular issues in print and an anniversary book in 2002, covering everyone from the likes of Mike Mignola to Frank Miller, Jim Lee to Joe Kubert and back again.

Our remit was the left of centre mainstream, imprints like Vertigo and also companies like Image and IDW. We garnered a lot of fans over the years as we approached things in a more irreverent British fashion.

In 2007 we swapped to producing a once a year full colour annual and we commissioned some very nifty things for that including a brand new Hellboy painted cover and a new Futurama cover too.

But it was getting tougher to keep print going and so after we did our 21st anniversary book in 2013, after a short-lived digital edition, we switched to the website in 2015.

So we have spent the past five years building up the website, offering a mix of curated content and brand new interviews with the likes of Howard Chaykin, best-selling authors Ian Rankin, Chuck Palahniuk and Philip Pullman and even internationally renowned painters and illustrators like Jeremy Mann and Simon Davis. But we missed print and so last year we began to plan our return to producing a print edition.

We launched our Indiegogo campaign in March of this year just before the world was hit by the coronavirus and we shall be running this campaign until 15 May. Obviously it is a challenge to crowdfund currently but many people have already been very generous with their support. There is something about print with its tactile feel and its reproduction of art that is impossible to match by producing a website.

Originally the first print magazine was due to come out in May but because of the current environment, it will now be out hopefully in October. We have lined up a very cool list of features and interviews including an exclusive chat with Kieron Gillen (Once & Future, Wicked + Divine), a Neil Gaiman feature looking back at his career and loads more including a Flash 80th anniversary feature, for which we commissioned a brand new cover created by illustrator David Michael Beck. 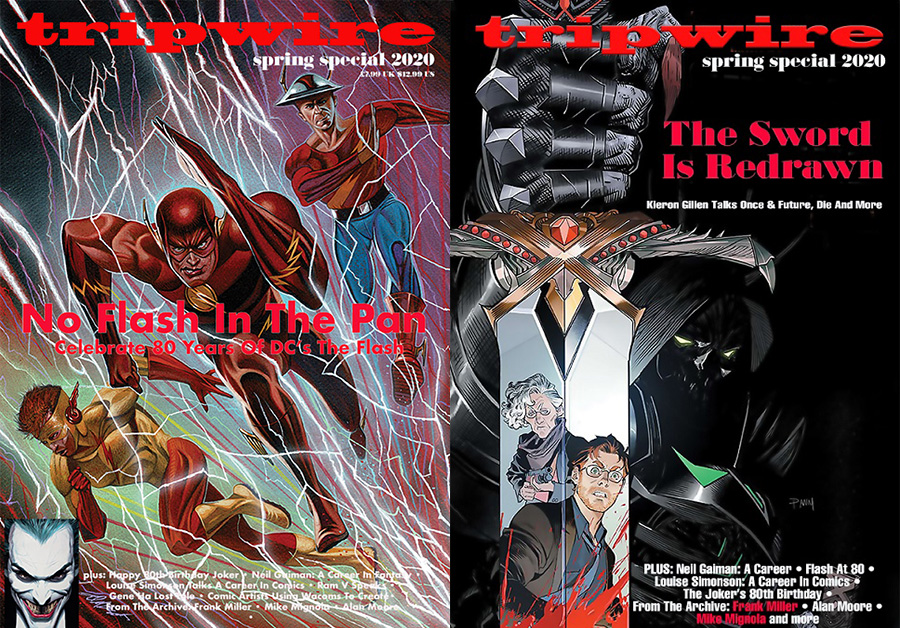 The print issue will now also include a James Bond in comics feature, a state of the industry piece looking at how all the comic publishers have coped and adapted with the virus and its aftermath. The new publication date is only a temporary delay and I have been very excited to get back to print, where this all began way back in 1992.

The hope is that if this works out, we shall be producing a print edition every three or four months. The format will be similar to the annuals we used to produce, clocking in at between 100 and 144 pages, squarebound and in full colour. 28 years after we started Tripwire as a fairly basic fanzine, our passion for comics and genre is undimmed. We are hoping that some of you reading this will join us for our new print iteration.

I thought I would leave the last word to one of our industry fans, legendary artist Bill Sienkiewicz, who said this about Tripwire very recently: “Tripwire covers such a wide variety of topics in the world of news, entertainment and the arts, and covers them so well, that it’s pretty much become my go-to source for what’s going on in media. I know if Tripwire is covering a subject, it’s not only interesting, fun and informative, it’s also legit.”