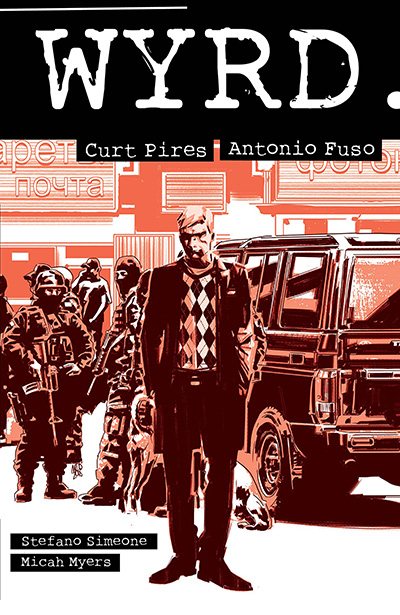 I had read this series with no expectations going in. I had no idea what it was about and just dug in. The book isn’t half bad and I enjoyed a lot of it.

It does get a a bit over the top with the violence at times, however. A little subtlety could have gone a long way here.

The book introduces us immediately to our main character who’s named Pitor Wyrd.

He is your average monster hunter type of guy for hire. He doesn’t age and he is pretty strong. We get a glimpse of his strength right at the beginning of the issue.

From there, it gets a little crazy.

Wyrd is hired to check out a small town that seems to be the victim of some sort of attack.

This scene is a bit unnerving and very well paced. We eventually get to see the creature responsible for all the havoc in the town.

At that point, an all out brawl starts up.

The rest of the book features a few more similar set ups: Wyrd gets hired. Wyrd fights a strange menacing creature. But there’s more to the book than just that. There is also a mystery dating back to the 1940s going on as well as some other intriguing subplots.

Pires writes a pretty good script. It does have some unnecessary stuff in it that detracts from the main story. Fuso does great work on the artwork. The ending has a nice lead in to another possible series with this character. I am interested to see where the creative team might take us next.