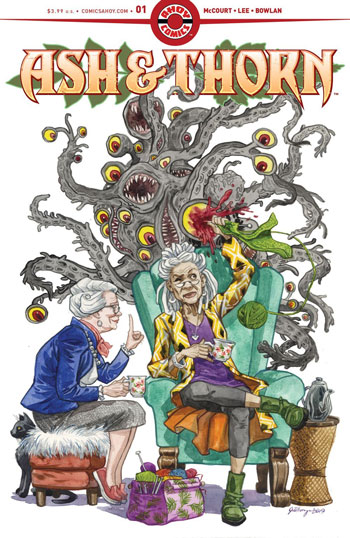 The people over at Ahoy Comics have really made a name for themselves these past few years. So anytime that they put out a new number one issue, I try to pay attention. I am glad that I did with this particular comic. It is well written and very imaginative and it feels like it’s unlike anything else out there at the moment.

At the beginning of the issue, we see the two lead characters outside. The pair are waiting for some spider looking alien creatures to appear on earth. The alien creatures appear and both Ash and Thorn are ready to take them on!

It was a pretty good beginning thus far!

We then flashback to a couple of weeks earlier. We get to see Ash meet Thorn for the first time.

Lottie Thorn is at home minding her business. She gets a knock at the door. That is where she meets “Ash” who is immediately disappointed that Thorn is the chosen one in the story.

Thorn is tossed into the middle of it all. She is also thrown into a legend as old time. She has to decide what her feelings are. She also has to accept the training that is required for her to succeed.

The story is well developed. I have a few questions but I will wait to see how it all plays out. The art is pretty spiffy too. Lee makes the comic look like nothing else on the stands. All in all, this is not a bad first issue.

I look forward to see where the creative team takes us from here.