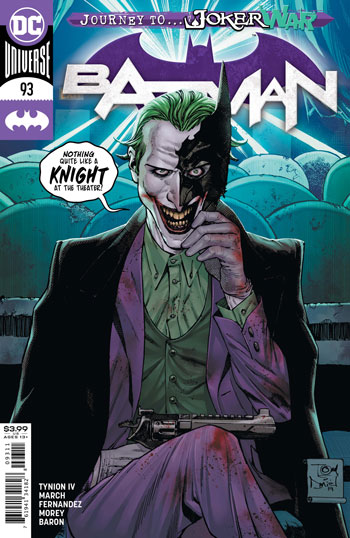 Writer James Tynion IV has had an odd run on this title thus far.

So far, his stories have been sloppy and all over the place. This issue is no different but it is the end of Tynion’s first story as writer of this title. Hopefully, some better things will come after this.

We finally get to see Batman go up against the Designer villain.

I know this Designer character is supposed to be this big thing, but honestly,  I find him kind of lame. He feels like he is forgettable and he also feels like he was dipped in weak sauce.

I would love a new Batman villain but he is of no consequence.

Speaking of that, let’s talk about Punchline. She feels like Harley Quinn, but completely unlikable. I feel like the creative team knows it too. Tynion immediately has a fight between her and Harley Quinn, in fact.

All it does is illustrate how much better of a character Harley is.

Suffice to say, Tynion doesn’t really even wrap up the story that he has been telling.

Oh sure, there is an illusion of a “conclusion” but it is false. This issue is instead a prelude to the upcoming “Joker War” storyline and pretty much serves as such.

The art is all over the place. It really has been over the course of Tynion’s run. Hopefully this get fixed soon. This book just ups my anxiety with each passing issue and not in a good way. I hope they get it under control.