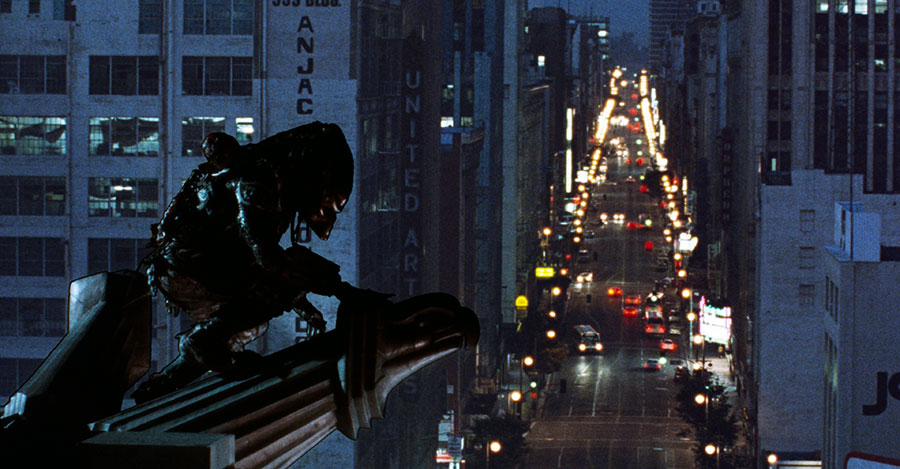 In genre movies, environment is everything. A common critique of moody, slow-paced sci-fi films is their prioritisation of atmosphere over storytelling, the “style over substance” complaints of Ridley Scott’s Blade Runner (1982) or Alien (1979). But more specifically, what’s so important in any action or horror film is a thorough understanding of the context our characters exist within, a clear distinguishing of the rules and boundaries of the setting. It’s because of this we can get invested and properly feel the narrative tension.

The original Predator (1987), directed by John McTiernan succeeds by subverting who is in control of the dramatic situation. After seeing the muscled, stony-faced mercenaries violently and victoriously tear apart the enemy camp, the audience believes that they hold all the power in this patch of Central American jungle. No earthly force has a chance against them.

The Jungle Hunter is alien to our planet, but is completely at home in the tropical environment. With finesse he cuts down our heroes one by one, forcing Dutch (Arnold Schwarzenegger) to revert to primal instincts and tactics. To defeat the Predator, he merges his identity with that of the jungle. Environment becomes key to defeating his foe. 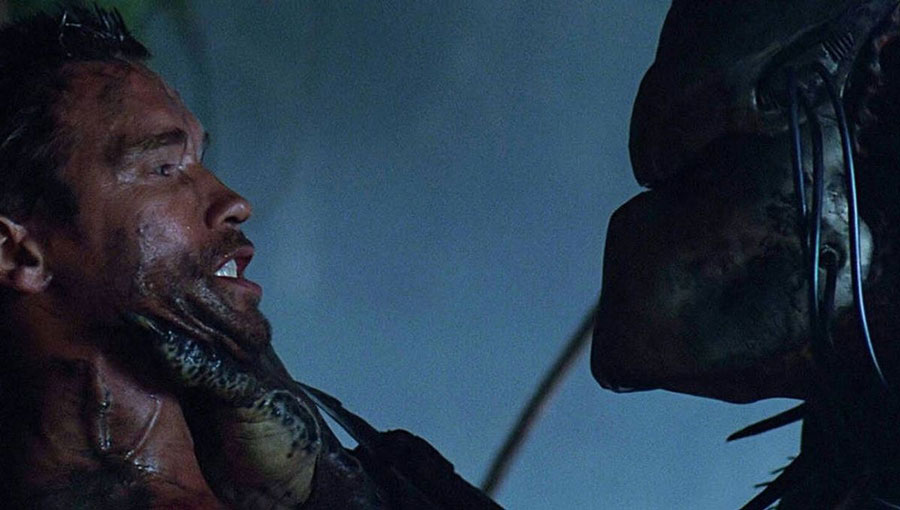 And while a lot of thought has certainly been put into the urban environment of Predator 2 (1990, dir. Stephen Hopkins), this isn’t necessarily a positive.

In the opening shot, the camera sweeps across dense foliage, intense drum music sounding over it. We are led to believe we are back in the jungle, before the skyline of Los Angeles is revealed, in the then-futuristic 1997. Gang war rages through the streets, and an unforgiving heatwave is asphyxiating the populous. Television news is presented by frenzied reporters in the throng of the action, and all guns are massive and are equipped with scopes. Everyone is sweaty and loud to the point of delirium. The presence of the Predator is honestly the least strange element of this film.

Taking some heavy inspiration from the dystopia of Paul Verhoeven’s RoboCop (1987) and Walter Hill’s The Warriors (1979), Hopkins shows a society on the brink of collapse where the last thing the law enforcement needs is a 7-foot extra-terrestrial master hunter slicing through people and hanging up their corpses.

Unlike initial audiences to the first film, there is no way to enter Predator 2 without some degree of familiarity to the titular monster. We expect, and welcome, the slaughter he will enact. In Hopkins’ bizarre, exaggerated city setting, what’s new to us is not the Predator, but the world in which he hunts.

This is therefore where our attention is pointed. We are distracted by the environment. Screenwriters Jim and John Thomas, who penned the original 1987 film, have said that they had to wait until the success of the Predator comic series before the sequel was greenlit, and their screenplay was based on the 1989-1990 limited series Concrete Jungle, where the action was moved to New York. A subway action scene in the film was lifted straight from the comics, and the script seems fascinated more with the Predator’s technology and lore than it does with telling a compelling story.

It’s difficult not to be intrigued and baffled by the excesses of the setting, and in addition, the wildness of the performances. Every piece of subtext is spoken aloud, mainly by our protagonist Lieutenant Harrigan (Danny Glover), whose eyes are constantly bristling with fear and rage. 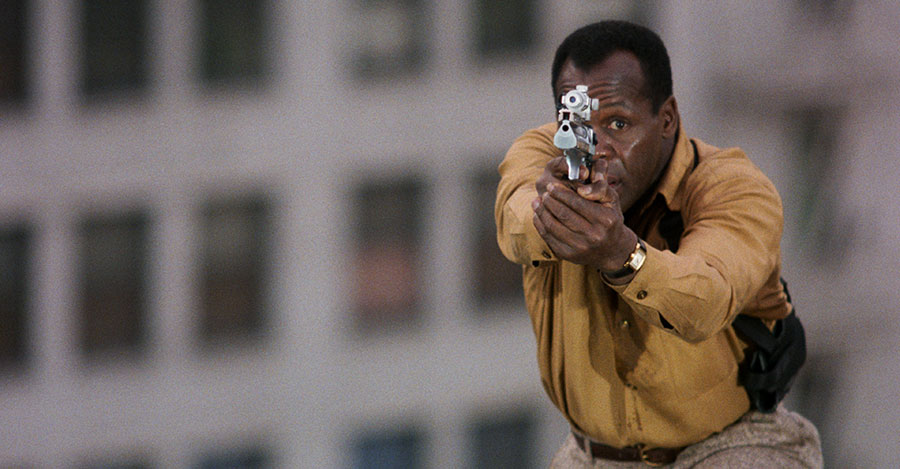 The violence is explosive and relentless, with Columbian drug gangs facing off against, as one reporter calls them, “the feared Jamaican voodoo posse”. Cultural sensitivity is not a priority of this film. Aping off the satirical tone of RoboCop, Hopkins extensively features a trashy news channel that parasitically covers everything scandalous from shootouts to conspiracies, titled ‘Hardcore’, presented by Tony Pope (a madcap Morton Downey Jr.). A kill-count on one programme shows the death toll as “5 assorted drug trash, 1 good cop.” But the celebration of bloodthirsty violence shown in this news channel is remarkably similar to the tone of the surrounding film. It’s difficult to argue Hardcore is satire when there is little distinguishing ‘Hardcore’ with the text of Predator 2.

The pacing is unforgiving, rarely taking a moment’s rest as we lurch from one set piece to another. Characters are shed from the film as soon as we no longer need them. The 108 minute runtime does whisk by with rarely a moment of boredom, and Hopkins manages to build some decent atmosphere in a couple of action scenes – the frenetic lights of the panicked subway train and the cold wash of a meat locker definitely stand out. The Predator now mimics and copies human speech in moments played effectively for horror and comedy. 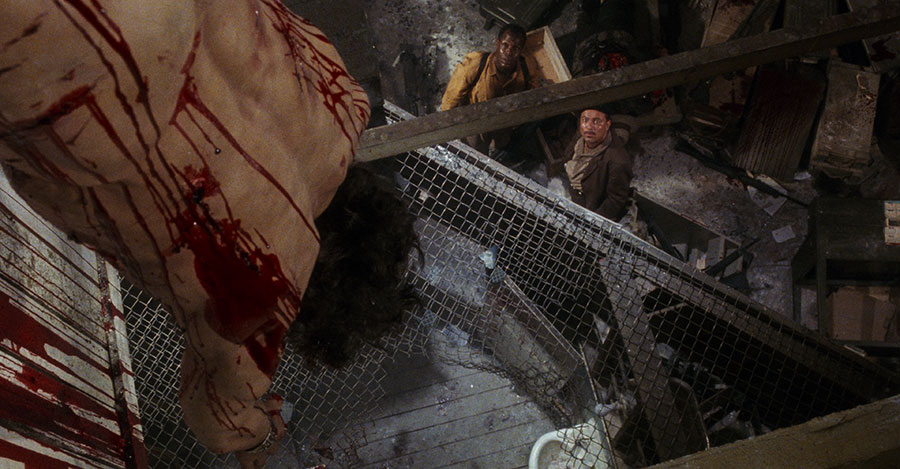 So why has Predator 2 forgotten? It sounds, at the very least, memorable. More tedious films are held in much higher esteem and have garnered cult status amongst genre fans.

I’d argue what fails Predator 2 is a mishandling of basic narrative storytelling.

In his book The Definitive Guide to Screenwriting, Syd Field dissects what he calls ‘the Passive Active’. This is where our main character, who is meant to be active in furthering the storyline, takes a back seat. They resign to, more often than not, simply reacting to events rather than causing them to happen.

Predator 2 suffers from this hugely. Harrigan is constantly playing catch-up to the Predator, putting pieces together in the wake of its destruction, when the audience has already been given all the information. In fact, of all the Predator slaughter sequences, Harrigan is only physically present for one of them. When the final act kicks in, Harrigan has to be physically taken to the action by secret operatives who know more than him. If he wasn’t in the film, it’s likely that everything would have gone the same way. As Syd Field argues, this means our protagonist disappears off the screen.

Now, applying this to a Predator film is perhaps disingenuous. We’re not here to watch the police work of Danny Glover, we want to see alien carnage! But I’d argue the film suffers from the Predator being too passive as well, as a result of the over-emphasis of the gang war in the Los Angeles backdrop. In many action sequences, the Predator sits camouflaged, passively watching gang members break out into violence before deciding to wade in. It keeps arriving to unrelated scenes of aggression and just sort of rides that wave. 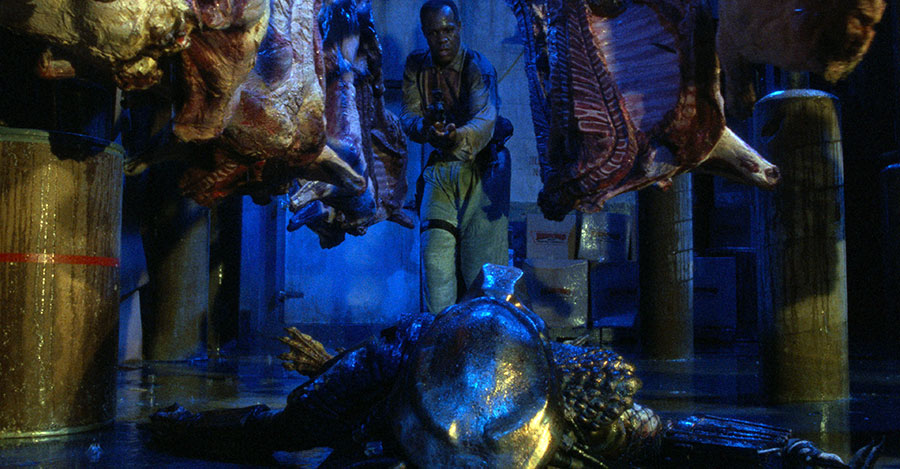 Whichever way you look at it, our protagonist and antagonist sit on the edge of the central conflict, piggybacking off the narrative tension. The final 20 minutes of fighting between Harrigan and the Predator features no other characters and feels detached from the rest of the film we’ve seen. When Harrigan defeats the Predator on his spaceship, the rest of the alien hunting party appear, and spare Harrigan’s life. Then they just leave. They must have gotten bored. 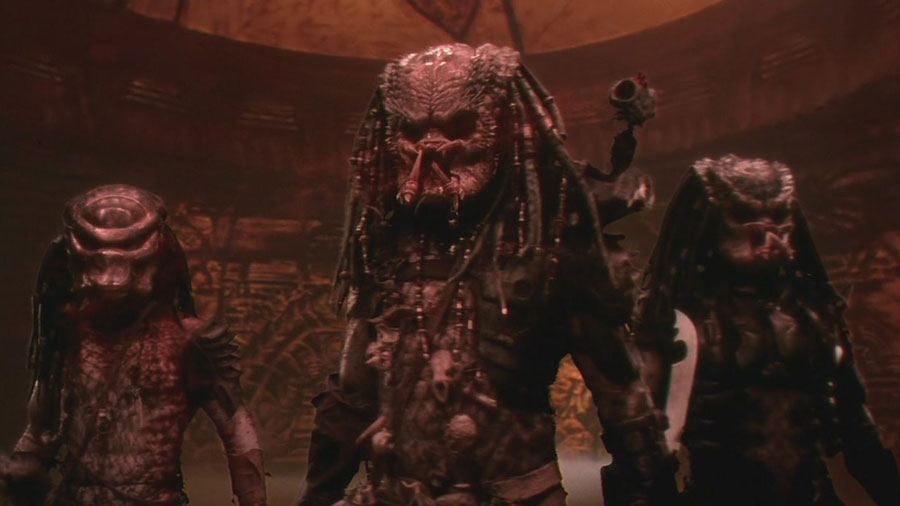 Is it worth watching?

It’s certainly the most interesting of the Predator sequels. The insufferable heat bleeds through the screen, and the outrageous, excessive celebration of violence solidifies the film as a period piece of the late 80s/early 90s. But so much effort was put into transposing the vicious jungle conditions of the first film into a modern, urban environment that the filmmakers seemingly forgot to find a proper place for the Predator there.

The Predator is meant to be a slick, masterful hunter, whose violence is not subtle but is purposeful. In Predator 2, his character has no weight to him, he feels disconnected from his hunting ground. It’s clear that Hopkins was fascinated by the mechanics and backstory of the Predator, that he neglected to work out a story it could be central to.