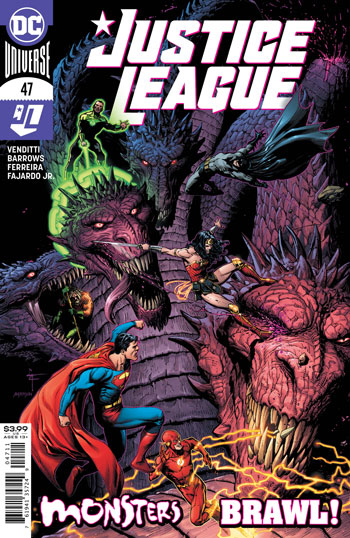 Justice League #47 wraps up the Justice League’s quest to reunite Jim Corrigan with the Spectre in a rather run of the mill fashion.

The Justice League is besieged by the Amazons and the Titan Tartarus.

Only by overcoming their resentments and working together can the Justice League succeed. It ultimately comes off as cliched as it sounds.

Wonder Woman and Green Lantern get moments to shine, but the conclusion feels rather rushed. I can’t help but think that Venditti could do more if his run had some room to breathe.

The Spectre has always been a character on a grand scale. So the conclusion to his arc feels small.

One gets the impression that the creative team wanted to bring humanity to the Spectre, and just wasn’t given room to do so.

Barrows delivers on his end, with art that just feels bigger than the story that is being told.

I enjoyed this creative team on Freedom Fighters, so it’s somewhat disappointing that they don’t come through as strongly.

The final pages with the Justice League confirming their bonds after their disagreements just feels warmed over. We’ve seen this before.

I have read far worse Justice League stories. But this particular arc just did not come together.