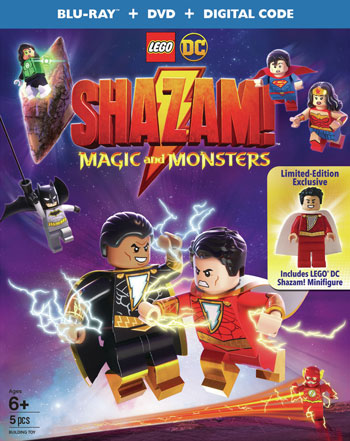 Megabrixels, Bat Exceptions, and the need for aerodynamic cows fill out the endless gift basket of fun in the latest Lego DC adventure featuring the hero of Fawcett City, Shazam.

This full-length animated feature film contains the classic good-versus-evil story and childish good fun that is unique to the popular brick-based toy franchise.

10-year old Billy Batson is new to the superhero game as he shouts a single word for a lightning bolt to transform him into a real adult superhero.

Shazam received an invitation to join the Justice League, but he is reluctant to do so out of fear that his secret identity will cause rejection. Meanwhile, The Monster Society, led by the tiny alien worm Mister Mind, hatched a scheme that turned the League into children. If that’s not bad enough, Black Adam has his own plans for world domination.

Youth and trust are the overarching themes of this bricktastic tale. Shazam doesn’t trust the League, and Batman doesn’t trust Shazam. Later on, a junior-sized Batman needed the adult Shazam to help him reach the Batmobile’s pedals. It’s a fun moment that showed trust as it also exhibited Shazam’s inability to drive a car.

Does The Flash need to be flashier?

Is stealing a healthy part of a complete breakfast?

These are some of the fun-filled questions the film (instead of films) asked as the hijinks ensued. The Wizard Shazam, who guards a magical lair known as The Rock of Eternity, hates moths. Well, his phobia didn’t improve when a monstrous moth attacked.

What would a Lego movie be without building something enjoyable? The League assembled vehicles to help save the day; however, Wonder Woman had difficulty locating parts to her iconic invisible plane because, well, they’re invisible.

Batman is the co-star, which is a good choice because simply put, HE’S BATMAN! The Dark Knight is used in a manner that augments the story without stealing the spotlight from the titular hero. Superman, The Flash, Wonder Woman, and Jessica Cruz’s Green Lantern round out The Justice League.

It was nice to see Jessica Cruz here because the (instead of The) Green Lantern role is usually filled by either Hal Jordan or John Stewart.  It’s presented in a normalized manner, which is important for young girls to see.

Mister Mind is a great villain because his miniature stature will bring hilarity to a child’s imagination. Shazam’s origin story is altered slightly and it worked perfectly in this setting. Sean Austin’s (The Goonies, Rudy) voice provided the perfect blend of childlike innocence and superhero bravery to Shazam, which enhanced the character’s overall presentation in the film.

LEGO DC Shazam!: Magic and Monsters includes one episode of Teen Titans Go and two episodes of Unikitty!, but the prize inside is an individually wrapped, unassembled Shazam LEGO minifig.

Shazam!: Magic and Monsters will surprise diehard fans and is a fun time for the entire family. Children are going to love this movie. It gives the imagination a lot to play with while being engrossed in the world of DC Superheroes; all while imparting a difficult but vital lesson:

”The best way to find out if you can trust somebody is to trust them.”
– Ernest Hemingway