Again, I stand in awe of this show being better than it should be.

This week, Courtney doubles her efforts to recruit a new JSA. One is a legacy while the other? Might not be invited.

The show opens with the death of Rex and Wendy Tyler at the hands of Solomon Grundy.

There’s a heartbreaking scene of Rex and Wendy leaving their son, Rick, in the hands of his uncle (who, surprise surprise, ends up being a grade A dickhead). Rick grows up not only without his parents, but with a resentful uncle who blames his poor lot in life on having to take care of Rick.

Contrast that with Beth Chapel, the nerdy and overly talkative girl from Courtney’s lunch table. She has a somewhat great relationship with her parents, but her parents are kind of hoping she’ll leave the next sooner than later, and maybe make a few friends. She is…if this show were called DR. MID-NITE, it might not fly as well as this one does, but Anjelika Washington is a treat when she’s on screen. She’s light hearted and fits almost seamlessly in every scene she’s in (or, she doesn’t, but that’s her charm). 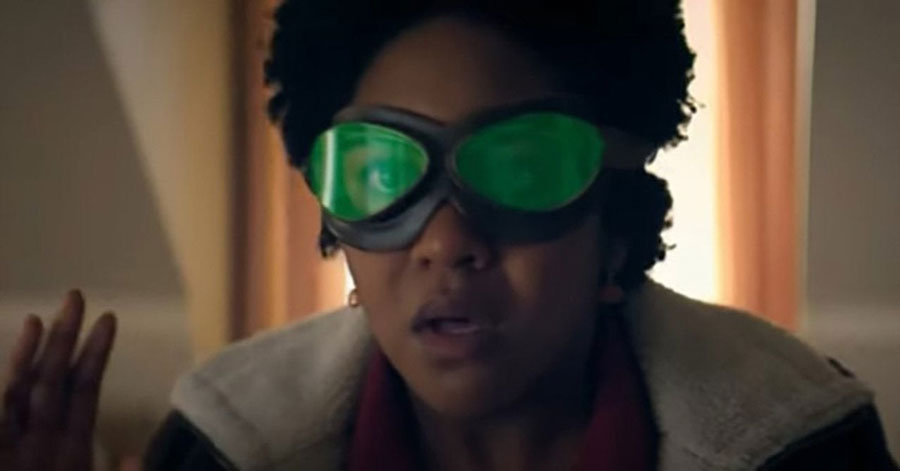 Naturally, Courtney wants Rick on the team. Besides being a legacy (as she believes she is), the hourglass reacts to Tyler DNA, so he’s a natural. Beth, however, finds Dr. Mid-Nite’s goggles by pure chance and yet, in the end, she forms a rapport with the AI and makes all the difference in the world; Rick believes that his parents had a car accident as a result of the wrong type of tire on his parents car, but the goggles, in a fantastic SFX display, reveal the truth.

As someone who lost his father in a car accident, that was tough to watch, but very satisfying in terms of character development and giving the episode a nice bow. There’s a great conflict now, as the team wants justice, but Rick wants revenge.

Elsewhere, Brainwave Jr.’s powers are starting to kick in. Cindy is being a pure bitch on wheels on Halloween. Some dude got drunk and threw up in a gizmo mask. The music in this episode was on point (I’m into the fact that they used Echo and the Bunnymen’s cover of People Are Strange from THE LOST BOYS, instead of the Doors original). Mike is…Mike. The principal of the school is the Fiddler and helps to hijack a satellite dish. And Pat found the stolen JSA items.

Courtney is bound to be grounded for sure.

One last note, as I’m not sure it means anything, but it might bear fruit. Courtney’s mom didn’t have much to do this episode, but it was clarified that Beth’s dad works for the same company. I get the feeling that her dad (and possibly her mom) have huge targets on their backs now.