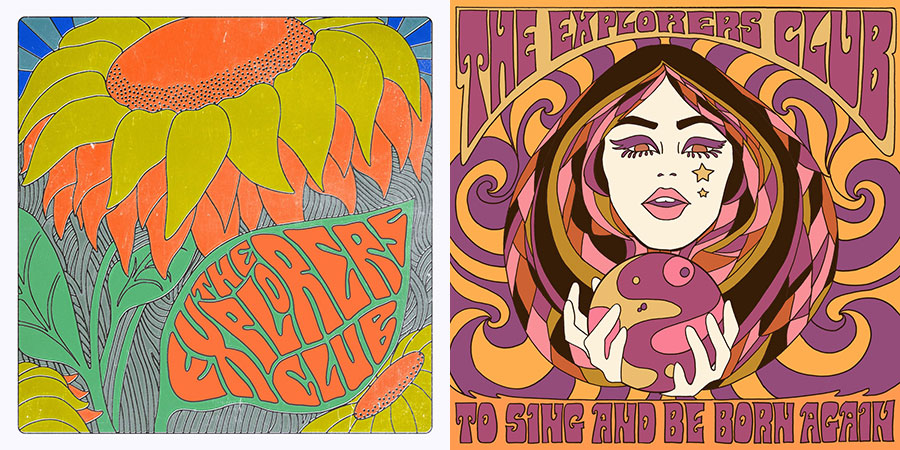 When The Explorers Club released their debut album, Freedom Wind, in 2008, it took a lot of folks by surprise. Their Beach Boys-inspired Pop was quite astounding. Main songwriter Jason Brewer and the band didn’t just play Brian Wilson-influenced music – they deconstructed it and then pieced it back together from the inside out. The Explorers Club did not pay homage to the California sound, they recreated it with a fresh, new perspective.

By the time they released their second album, the phenomenal Grand Hotel, in 2012, the band had moved forward and embraced more influences from Sunshine Pop to early ‘70s Soft Pop.

Together, their 2016 album, pulled back the influences and focused on the California sound again. And yes, it was another inspiring triumph.

So, after three uplifting Pop feasts, fans were left wondering, “Where will The Explorers Club take us next?”

It is 2020 and now we have an answer to that question. With Brewer still at the helm and a continually revolving cast of music makers, The Explorers Club has chosen to take the ‘covers album’ route. Wait, hold on… They’ve actually released an album of all-new original music. No, sorry, definitely a ‘covers’ album. Oh, AND an album of original material. Yes, Pop kids, you got that right – The Explorers Club has gifted us with TWO albums!

The band’s fourth album of originals – The Explorers Club – and their covers album – To Sing And Be Born Again – are magical slices of emotional Pop music. They both look to the past for inspiration and they march forward into the future with determination and purpose.

Featuring musical assistance from Matt Goldman, Shane Tutmarc, Chase Johnson, Johnathan Pushkar, Probyn Gregory and many others, these are albums destined to be listened to and studied for years to come.

First up, The Explorers Club, their fourth studio album overall. Embracing the sonics of their previous albums, The Explorers Club take you to new heights and gives their ‘masterpiece’ Grand Hotel a run for its money. Yes, it is very much inspired by the harmony-laden sound of The Beach Boys but it also ventures into Sunshine Pop and Soft Pop territory. With influences ranging from The Turtles to Gary Usher and Curt Boettcher, the album is chock full of melodies that can only be described as heartfelt and beautiful. This is music from the soul. Every harmony, every chord change, and every musical twist truly matters. The songs are comforting, warm, and littered with musical signposts that will make them ‘sound’ familiar but still feel exciting and fresh. Kind of like meeting an old friend again… for the first time. “One Drop Of Rain”, “Dawn”, “Look To The Horizon”, “Mystery” and “Say You Will” are today’s highlights. However, those highlights change from day to day.

A stunning achievement to say the least.

Generally, I’m not a fan of ‘covers’ albums, but if I had ignored this release, I would have missed out on an album that is just as wonderful as their original releases. To Sing And Be Born Again takes ‘60s Pop classics like “She’d Rather Be With Me”, “This Guy’s In Love With You”, “Kicks”, and “The Mighty Quinn” and breathes new life into them.

These new interpretations don’t drift too far away from the original versions but Brewer and the gang manage to make them fresh again. The melodies are set free and dance around the room like they did the first time we heard them some 50+ years ago. Former Barenaked Ladies vocalist Steven Page sounds as great as ever on a cover of Orpheus’ “Can’t Find The Time”. Drive-By Truckers’ Jay Gonzalez lays down a brilliant vocal and adds a deeper level of emotion to The Lovin’ Spoonful’s “Didn’t Want To Have To Do It”. And Jason and the other Explorers offer up some fantastic vocals as well. If you are like me and generally avoid ‘covers’ albums, put those prejudices aside and open up your mind and heart to this gem of an album.

Go forth, my friends, and purchase these releases. They are available on CD, vinyl LP, and digital download.