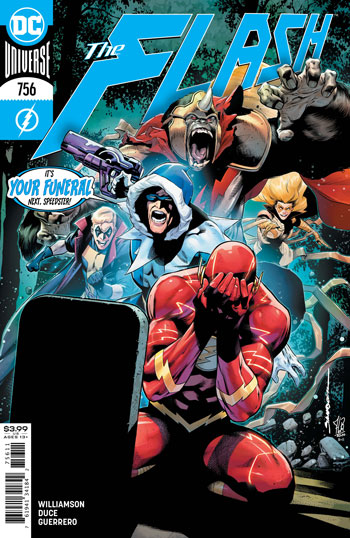 This book has been amazing since the Rebirth initiative started.

Writer Joshua Williamson has been there since the beginning, shaping this title into something wonderful. I love the direction he has taken this book.

We are close to his final lap on this title.

The opening of this book takes place in Gorilla City many years ago.

Grodd was ruling at this point and we first see him sitting on a throne. Then, he angrily gets up and snatches the Reverse Flash. He picks him up by the neck. This is an awesome opening.

We get to see the two of them plotting.

It is a really strange good time to read.

The Reverse Flash has an idea for some mischief in the future.

This is when we cut to the present day. We see Barry running and then a whole bunch of stuff happens. It gets pretty insane.

We start to see the Reverse Flash build his own sort of family. It gets pretty interesting who he chooses to be a part of it. Meanwhile, we get to see Barry get free of Paradox! But he may not have much time to recuperate as forces start to really converge on him.

The story is pretty awesome. The art by Christian Duce is really great as well. Duce is one of my favorite artists on this book and he does great with what might be one of his last outings.

This is some really enjoyable stuff and I can’t wait to see how Williamson wraps up his run.