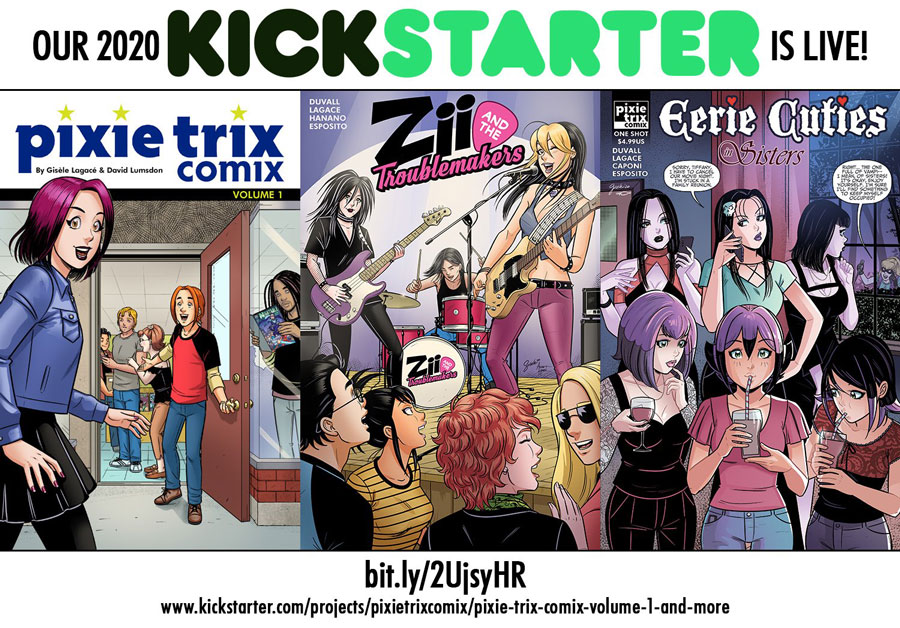 The latest Pixie Trix Comix Kickstarter (their 6th), from writer/artist Gisele Lagace (Archie Meets Ramones, Jem and the Holograms), with contributions from myself, Scott Duvall (Army of Darkness/Bubba Ho-Tep, Narcopolis: Continuum; and former FOG! contributor and co-writer of They Called Us Enemy as “Steven Scott”) as a writer for the first time in the world of Pixie Trix. For this KS, I wrote the Zii and the Troublemakers one-shot, about a Canadian band on tour, a 56-page spin-off comic from the long-running Ménage à 3 webcomic. In addition there is a new Eerie Cuties: Sisters one-shot, featuring three new Eerie Cuties short stories written by me with art by Gisele. The main feature is a new collection of Pixie Trix Comix, a new ongoing web series also spinning out of the world of Ménage à 3 and co-written with Gisele’s longtime Ma3 collaborator, David Lumsdon.
* * * * *
Summertime conjures up a lot of sights and sounds, and if you’re anything like me, summer is synonymous with music. Providing the soundtrack to our life experiences, like a time capsule, music can transport us back to a time and place in our lives that remind us of the people we were with, and the experiences we shared.
Comics are like that for me too, and so anytime I get the opportunity to combine my passions into a writing project, I jump at it.
That’s exactly what happened when writer/artist Gisele Lagace of Pixie Trix Comix invited me to participate in her latest Kickstarter.
Gisele and I first met through work at Archie Comics. My dream project I was trying to get off the ground was a Josie and the Pussycats series with Gisele as the artist. It was not meant to be, however, what came out of it I’m even more excited about.
Knowing that I was itching to tell a story about a band on the road, she thought maybe I’d be interested and she was right! She asked for 24-28 pages and I gave her 56 to draw, so I guess you could say it was a terrible itch and I scratched it real hard!
In Gisele’s recently concluded web comic Ménage à 3 co-written with David Lumsdon, one of our lead characters, Zii, has spun-off into her own one-shot, Zii and the Troublemakers, to pick up where her story leads while she’s out on the road with her band. 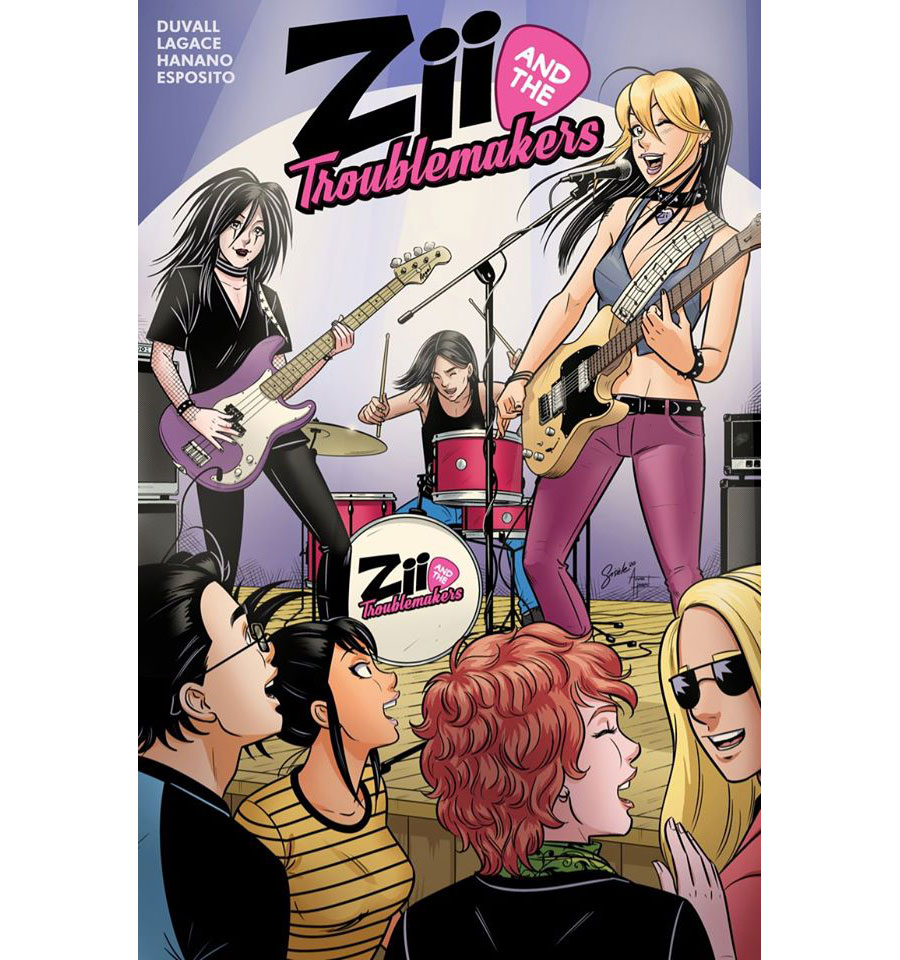 Newcomers are more than welcome, as this story draws on the history of the characters, but won’t be confusing for first-time readers. All you need to know is a rock trio and their manager are three months into their cross-Canada tour and tensions come to a head at their latest stop in Vancouver. That is a city that I’ve grown to know  and love over the years and I wanted the band to be out of their familiar surroundings of Montreal, but to be in a place I knew well so that the city itself would feel like another character in the story. I can promise, there will be sex, drugs, and rock n’ roll, in this special one-shot starring Zii and co-starring more fan-favorite Ma3 characters.
In addition to getting the opportunity to dip my toe into the world of Ménage à 3 and play with those characters, I did the same with the cast of Eerie Cuties, another web series from Pixie Trix Comix starring a couple of teenaged vampire sisters. 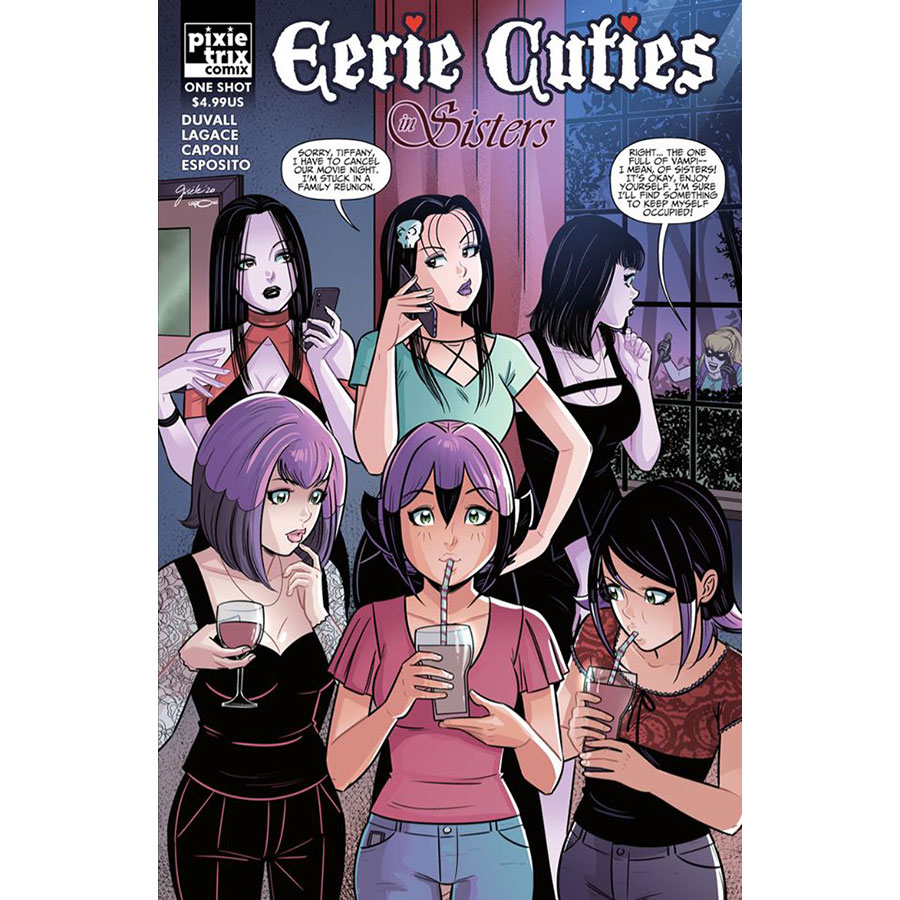 In fact, this one-shot titled Eerie Cuties: Sisters focuses on Layla and Nina and explores a few of the things that bond these sisters like addictive gaming, family reunions, and dating, as well as what drives each other crazy about the other. I love vampire stories and want to tell more of them, so this was a really fun way to play with familiar horror tropes while putting it through the Eerie Cuties filter. I love Layla and Nina’s dynamic and so when Gisele said she wanted stories that put a spotlight on the sisters, I knew exactly what I wanted to do. I drew a little inspiration from the relationship of Raina Telgemeier in her graphic novel Sisters, hence the subtitle, so it should appeal to that audience, but with a Hotel Transylvania bent to it.
There are so many other cool things in this Kickstarter you are going to want to check out, not the least of which is Volume 1 of Pixie Trix Comix, the ongoing webcomic that spins out of the events of Ménage à 3 and is now being collected in print for the first time. If you’re unfamiliar with the work of Gisele Lagace and her Pixie Trix Comix collaborators, now is the time to familiarize yourself as it’s all in the Kickstarter, so don’t delay and check it out! – http://kck.st/2A5yddL
In this article:Behind-The-Scenes, Comic Books/Strips, Comic News, Indie Comics, Kickstarter