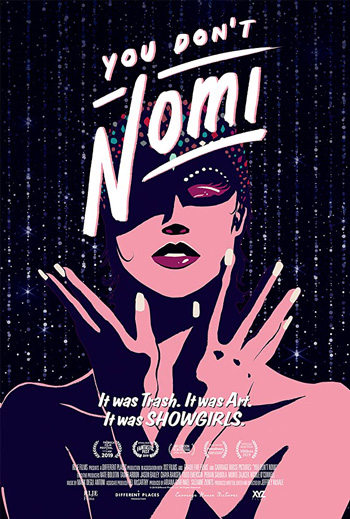 I vividly recall being very curious if not overly excited when Showgirls was about to be released in 1995. I liked Verhoeven a lot but didn’t have much interest in a Vegas rise-to-fame story, copious nudity or not.

Still, the novelty of a mainstream release with an NC-17 rating coupled with the anticipation of the director’s excesses piqued my interest.

Then the reviews came out.

I decided to wait for home video; I recall finally watching the film with my roommates and, at around the hour mark, I blurted out, “I feel like I’ve been watching this movie for a week!” Tired mumbles of agreement all around.

You Don’t Nomi certainly covers the overwhelmingly negative reactions thoroughly, many of which were unkind (Siskel is downright cruel in his putdown of lead Elizabeth Berkeley’s looks).

But director Jeffrey McHale also wants to examine the reevaluation the film has received by many in the years since, as well as the tiny handful of fans who liked the film from the get-go.

Adam Nayman, author of the book It Doesn’t Suck: Showgirls offers up a nice defense, as does Jeffery Conway, who, after watching the movie for the umpteenth time, decided to honor his cinematic beloved by writing a full-length book of poetry entitled Showgirls: The Movie in Sestinas.

There are some fascinating discussions of the motifs in the film (nails and chips being the main ones) and comparisons to other films in the Verhoeven canon, both stylistically and thematically.

I appreciated the dissection by many of Berkeley’s performance, which I found to be flagrantly awful when I saw the film for the first time. Many come to her defense, claiming it was never meant to be a naturalistic turn, but a heightened, almost operatic one. (I was reminded of the initial drubbing, and subsequent embrace, that Jack Nicholson received for The Shining).

It’s fun to see Verhoeven’s shifting defense of the film over the years. He initially released a companion book in which he describes in detail his intention of making a socially relevant, hard-hitting drama. Later, he claims it was always meant to be a comedy. Years after that, he defends his choices as being influenced by early 20th Century German expressionist painting. Fun stuff.

As mentioned at the head of this review, You Don’t Nomi does have some surprising emotional content. Showgirls was a touchstone for many in the LGBTQ community, as it depicted an outsider running away from an unaccepting family to find acceptance elsewhere.

Also, there’s the poignant story of April Kidwell, who as a teen left her unloving folks to make it big in NYC. She was almost immediately drugged and raped, and was so stricken with PTSD that she couldn’t work and in fact didn’t speak for a month.

She eventually found solace – and catharsis – after she was cast in Showgirls: The Musical as Nomi (the Berkeley role). It allowed her to face her demons nightly and to find acceptance with adoring audience members and supportive fellow cast members.

You Don’t Nomi  has some flaws – McHale’s consistent use of Showgirls clips appearing on computer, movie and TV screens in scenes from other Verhoeven films is a bit cutesy and distracting – but this is an accomplished, hugely entertaining and informative doc that should even appeal to film buffs who found the original film beneath contempt.