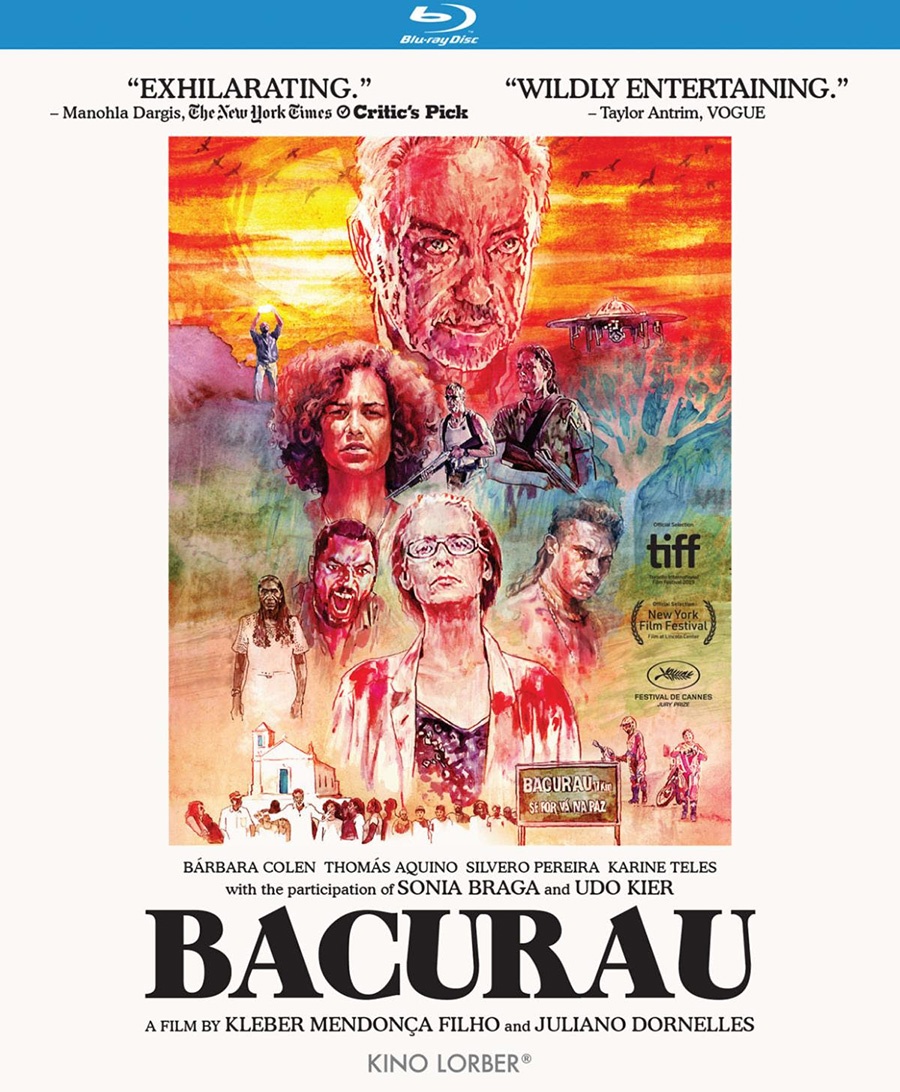 Kino Lorber is proud to announce the Blu-ray and DVD release of Bacurau, the critically-acclaimed, award-winning Brazilian “Psychedelic” Western-thriller directed by Kleber Mendonça Filho and Juliano Dornelles, and starring Sônia Braga and Udo Kier. Blending genre filmmaking with sociopolitical commentary, Bacurau has been compared to the Spaghetti Westerns of Sergio Leone as well as the Oscar-winning Parasite with its themes of class disparity.

A unique mash-up of the Western, horror, and sci-fi genres, Bacurau is a Dystopian, pulse-pounding thriller about a small community in Brazil who bands together to defend their village after they are besieged by a group of armed mercenaries.

A few years from now…
Bacurau, a small village in the Brazilian sertão, mourns the loss of its matriarch, Carmelita, who lived to be 94. Days later, its inhabitants (among them Sônia Braga) notice that their village has literally vanished from online maps and a UFO-shaped drone is seen flying overhead.
There are forces that want to expel them from their homes, and soon, in a genre-bending twist, a band of armed mercenaries led by Udo Kier arrive in town picking off the inhabitants one by one. A fierce confrontation takes place when the townspeople turn the tables on the villainous outsiders, banding together by any means necessary to protect and maintain their remote community. The mercenaries just may have met their match in the fed-up, resourceful denizens of little Bacurau.

Bacurau has been a hit with critics and festival audiences alike. It was chosen as an Official Selection of the New York Film Festival and Toronto International Film Festival, won the Jury Prize at the Cannes Film Festival, and was named as a New York Times Critic’s Pick.

In response to closure of theaters due to COVID-19, Kino Lorber released Bacurau on its Kino Marquee “virtual cinema” platform sharing revenue with independent art houses across the country. Bacurau played in virtual screening rooms in over 200 national markets, including New York, Los Angeles, San Francisco, Austin, Chicago, Nashville, Washington DC, and many others.

Bacurau is also now available to rent and buy digitally on KinoNow.com.