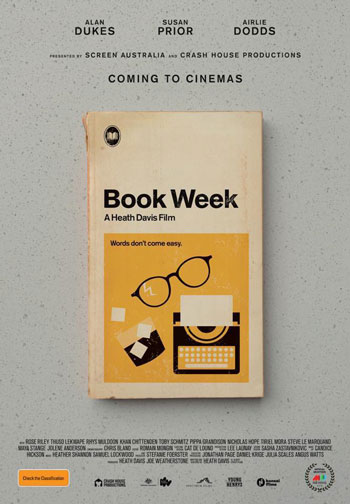 Nick Cutler is having quite a week.

He’s reaching critical burn-out in his teaching job, his girlfriend is pregnant, he keeps catching the ex-juvenile offender he’s mentoring breaking the law and he finally is inches away from his dream: to have his book published.

There are two catches to see this dream come to fruition. He must change the zombies to vampires (they’re trending right now, apparently).

And, most importantly, he must keep his nose clean while they finalize the deal.

Nick has a bad reputation as a bitter, boozing, condescending ass, and the publishers don’t need that kind of PR.

So, Nick being Nick, he leaves the meeting and immediately goes to the pub to celebrate, getting sloshed and hooking up with a much younger lass.

Book Week does a nice job of walking an uneasy tightrope. We need to understand that Nick is a self-destructive jerk while still finding him at least somewhat sympathetic and interesting so as not to be a total turnoff.

The care with which the filmmakers tread this line would be for naught if it wasn’t for Alan Dukes’ wholly committed performance as Nick.

He’s obviously incredibly smart but also insufferable; yet there are crucial moments when we see a warmth in his piercing blue eyes.

At times, his demeanor is almost too much. But Dukes and the filmmakers know when to pull back and either let him endure some much-deserved comeuppance or allow a sliver of light to emerge from this dark soul.

The supporting cast is aces.

Rose Riley is perfect as a student who freely admits that Nick made her want to be a writer while openly deriding his personality at every turn.

Unfortunately, she is involved in the one bad scene in the film, a spelling bee that goes cartoonishly wrong. It’s a silly scene, badly staged and is wince-inducing as opposed to funny.

This bump notwithstanding, Book Week is a well-wrought character study/comedy/drama that is entertaining and ultimately moving.

No spoilers, but it’s a pleasure to watch in suspense to see if the “good man inside”, as one character puts it, will emerge.