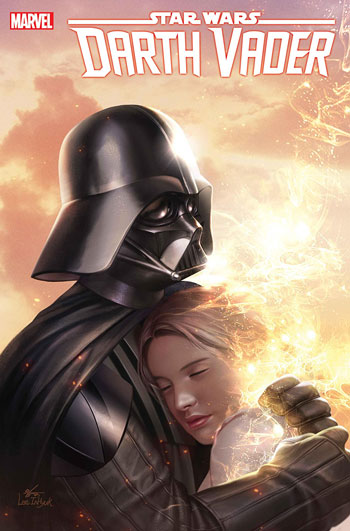 The ghosts of Vader’s past haunt the dark lord as he seeks to destroy anyone who hid the existence of his son, Luke Skywalker. Darth Vader found an unlikely ally in Sabé, Padmé’s lookalike decoy from Episode I.

Vader returns to Naboo with Sabé to investigate Padmé’s murder and meet up with two gentlemen.

One of them who hasn’t been seen since Revenge of the Sith. Greg Pak’s ability to use information without setup works wonders here. Sabé’s colleagues swear to avenge not only Padmé but Anakin Skywalker, in front of Vader, which conjures many emotions for the reader.

Similar comments in the same vein come off as someone unaware the person they’re insulting is right behind them.

Pak also continues to make great use of Vader’s forensic droid, ZED-6-7. The blunt efficiency of ZED’s analysis in certain situations fills the room with tension. He also doesn’t mind reminding assassins about the folly of their mistakes when they make a weak attempt to kill Vader. ZED figures out things very quickly, and with all of the Anakin/Vader interplay, it wouldn’t be surprising if he eventually discovers who is underneath the helmet.

Raffaele Ienco produces several Nubian visuals that harken back to the prequels along with familiar underwater entities.

Ienco also draws great emotion from the still mask of Vader. Head movement is superbly depicted and framed in a way that tells the reader what Vader is thinking. This kind of work is a credit to the book as it speaks volumes without a single spoken word.

How is Vader going to handle this?