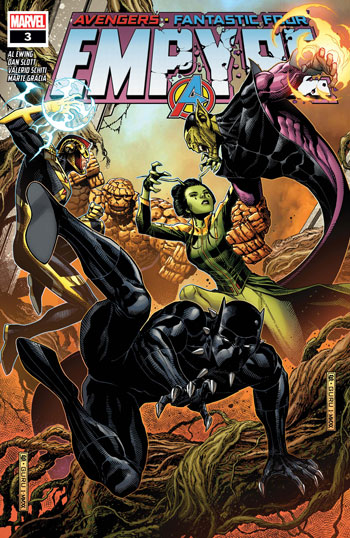 This third issue of Empyre is where the plot feels as if things are slowing down just a bit before the big ramp up to the climactic chapters.

If we are going to see an improvement from the middling early chapters, we’d start seeing it here. There is certainly a seed planted that might bear interesting fruit in a later chapter. But this particular issue is not making me overly excited for this series.

The issue starts with Reed Richards narrating a run down of what the Avengers and Fantastic Four are facing. We also get an introspective scene between Reed and Tony Stark.

A point of contention for me is that the reader is supposed to believe that an experienced Avengers squad is supposed to fall for an obvious double cross from the Cotati.

This scene attempts to resolve that dilemma. It doesn’t really succeed. But it does provide a great character moment between two of the resident Marvel Universe geniuses.

This issue is all about the quiet moments setting up what is to come.

Quoi and Swordsman laying out their main goal- the Vibranium enriched soil of Wakanda. With the introduction of Wakanda, we get a Black Panther who is sharper than Tony Stark. T,Challa already knows what is at stake and ready.

In the last chapter Captain Marvel was given a power up to Accuser level.

The whole thing is mentioned so quickly. The creative team might as well have said “Look just go read Captain Marvel’s own book”

Two characters are introduced to this story in this chapter. Quoi’s mother, Mantis and R’Kll, Hulkling’s grandmother. Their introduction seems to promise something different for a crossover that’s been fairly generic at this point.

What has not been generic is the art. It really is a book that manages to look better than it actually is. The art along with some of the interesting characters introduced might improve this crossover.