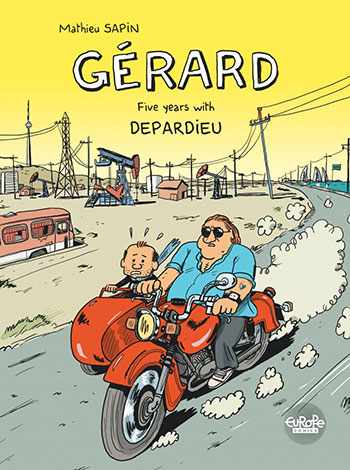 Written and Illustrated by Mathieu Sapin
Published by Europe Comics

This one is odd, to say the least.

Both in its style and substance it’s strongly akin to the autobiographical, introspective graphic novels and comics that have been winning awards in recent years.

Only it isn’t autobiographical at all. It’s someone else’s story. And that someone else is the world famous, extremely controversial French movie star, Gérard Depardieu.

You know, the great big lovable fella that played Obelix in the live-action Asterix movies.

Never so lovable in real life, Depardieu never actually caught on much in the United States in the way earlier French film icons such as Jean-Paul Belmondo or Alain Delon had.

Much of his publicity in this country has, in fact, been of the negative, gossipy variety such as his airplane antics or groping women or kissing up (literally) to Vladimir Putin. As someone who has seen a number of his movies, though, I can attest to the fact that he is at his worst a fascinating actor and at his best, brilliant.

Mathieu Sapin is the cartoonist who got to find this all out first hand and has now documented it in Gérard: Five Years with Depardieu. Like the actor, the book is fascinating throughout and at times, brilliant. And while, as I said, it is the story of Depardieu, Sapin himself becomes also a major player in that story.

Big-nosed, sweaty, and morbidly obese, the unflattering caricatures of the actor are nevertheless physically fairly accurate and realistic. It’s probably a safe bet, then, that the demanding, egotistical, entitled, and generally annoying personality is unfortunately also pretty true to life.

The book details Sapin accompanying, interviewing, and drawing the actor on film shoots, on vacations, and on his eventual defection to Russia. Much of the dialogue comes from Gérard’s own words. It tries hard to portray Gérard Depardieu as a deep, thoughtful, philosophical, valued human being, and while I appreciate the effort involved, he still comes off as a major jerk on pretty much all levels.

In the end, it’s all quite well done, but even though he is at times curiously interesting (in the way a train wreck is interesting), it’s the thoroughly unlikable Gérard Depardieu himself who keeps this from getting a full recommendation from me.