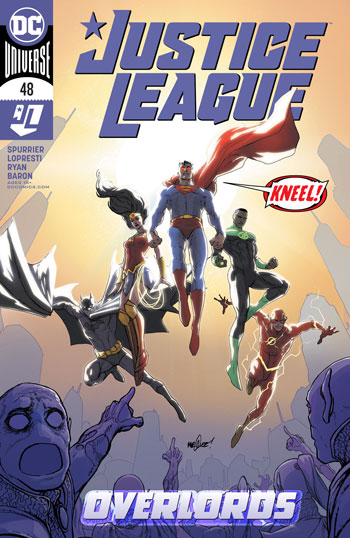 Like millions worldwide I tuned to Hamilton this weekend.

He’s certainly making the Justice League his own.

The Justice League receives a distress beacon from deep space. A space vessel is under attack. It’s attacker- a deep space creature. By combining brawn, teamwork, and smarts the League chases away the creature and rescue the space vessel.

Solid story. Action packed. Lots of fun. See you in a couple of weeks.

The vessel is full of helpless space children. They were exiled by a tyrannical ruler as a form of punishment..

This tyrant rules by creating division and sowing fear.

No, I don’t see any parallels. Why ever would you ask?

In rescuing the children the Justice League plants the seeds of hope.

By the time the Justice League have returned the children to their home planet, the tyrannical leader has been overthrown. The mob is on the verge of killing their tyrant. However Superman steps in to stop mob justice. We get a lively discussion between Justice League members. How much should the League be interfering in other world’s affairs.

But just as we think we will get an interesting discussion on the responsibility that heroes carry, they are attacked by another party. They are promising annihilation, setting up the action for the next chapter.

Spurrier introduces a lot of great ideas. It’s obvious that he has a lot of interesting things to say when it comes to the Justice League. This first issue almost felt too packed.

Lopresti keeps the story moving. Introducing alien races could lead to a confusing story but Lopresti brings a great eye for clarity in storytelling.

Consider this a great start to this Justice League run.