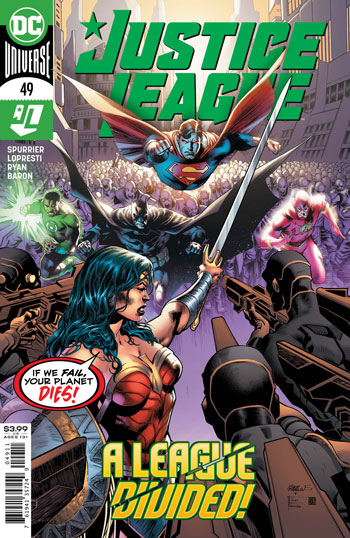 This issue of Justice League continues Sy Spurrier’s run in a fascinating manner.

This issue asks, “What happens once our heroes win?”

Internecine warfare, a superpower that may be in over it’s head, differences of opinion within the leadership that has placed itself in charge. Sy Spurrier’s Justice League is trying to remind us that genre storytelling can speak on world events. If you are not going to be subtle, you should at least be entertaining, and this issue manages to pull that off.

This issue begins where the last issue left off.

The League has saved the Trotha from a suicide bomber. Wonder Woman and the rest of the League are divided on how to proceed.

Wonder Woman shows herself as the most thoughtful member. She refuses to assume that the Justice League knows best. We are shown Wonder Woman attempting to get to know the customs and differences between the people on this planet that they are trying to help. She understands that stepping into this situation could lead to more harm than good.

We are shown throughout an overly paternalistic Superman.

He sees the people as defenseless and helpless. He misunderstands a customary funeral to be an act of violence. Batman appears as an overly aggressive, pessimistic interrogator. The Flash is interfering in a mating ritual and assuming it’s an act of simple cannibalism.

This issue is really working on the allegory of a superpower stepping into a quagmire and being overwhelmed.

One can appreciate how the Justice League members have their clear differences. The mistakes they are making are natural extensions of how these characters have always been written. It’s not shoehorned in to make the allegory work.

Spurrier is putting together a solid Justice League adventure. He seems to enjoy writing these characters but recognizes them for their flaws. I have not mentioned the great work Lopresti is putting together. He keeps the story moving.

All in all, a pretty good chapter in what looks to be a meaningful Justice League run.