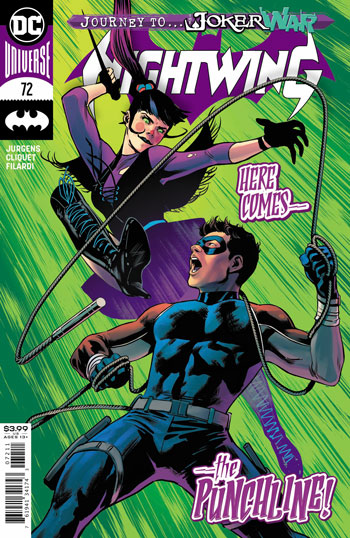 This issue ties in with the recent “Joker War” storyline that is going on presently.

I am a bit sad about that, mostly because this series had it’s own thing going on. The creative team here does a good job, however, in making this a compelling comic book to read.

The beginning of this issue is a great set up.

I commend the creative team wholeheartedly on this. We see Bea gathering a bunch of tree branches. We see her get them primed. Then she lights them up. And the fire from the branches forms a makeshift Bat-Signal!

From there we see Batgirl swinging through Gotham.

That is when she runs into Dick Grayson!

The two of them are really happy to see each other. And it is a really wonderful moment, too. But then right after this, things turn dark fairly quickly for the two of them.

And then a big fight scene erupts. This fight is the crux of the issue. While it is certainly a well done fight, Punchline really doesn’t do much for me as a character. She just seems mean and nasty, with no element of mirth that the best Batman villains have.

I do enjoy how the issue ends.

Jurgens knows what he is doing writing this comic, and he writes a good script here. Ronan Cliquet is awesome and I love his artwork.

This is some great stuff overall and it is a very entertaining issue.