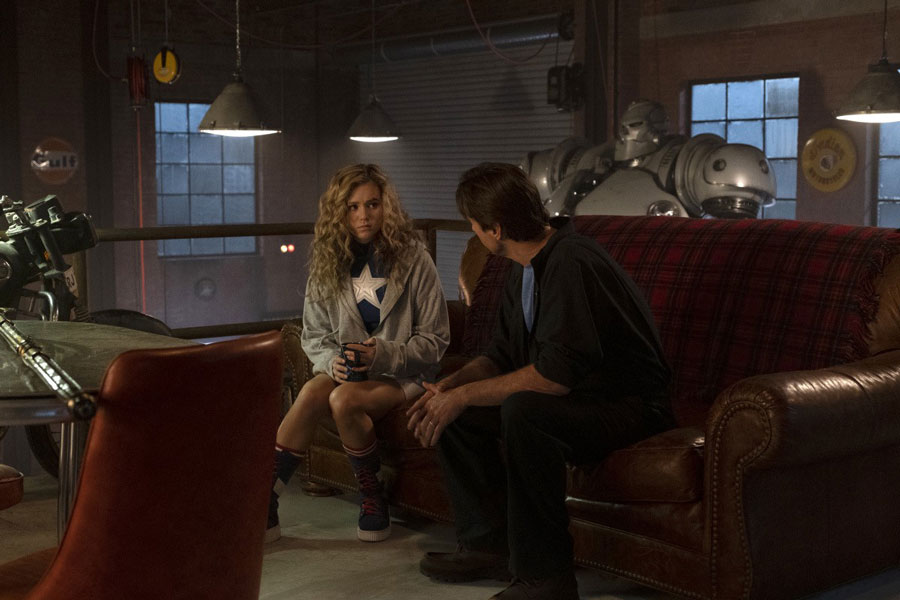 S010E8 — After Courtney gets herself into some trouble, Pat decides they need to come clean to Barbara. Meanwhile, Yolanda, Beth and Rick lead an investigation into a classmate.

Kiss my ass, you started with Cannonball Run in your pre-title sequence. I love this show!

After last week’s knockdown-dragout with Shiv, Pat orchestrates a car accident to cover up for Courtney’s obvious injuries. It’s possibly one of the most paternal things he’s done so far (that’s not to say that Pat hasn’t been paternal towards Courtney; it’s just he’s mostly been used as a mentor more than a father, and I hope we get more of the latter because Luke Wilson is really growing on me in this role.).

By contrast, we see Cindy/Shiv with her father (aka the Dragon King) and it’s not nearly as caring or even remotely mentor-student. It’s contentious and almost spiteful; Cindy is so eager to prove herself ready, but now, I don’t think it’s to make her father proud, necessarily; I think she has desires to take over. Hard to say right now, but Dragon King’s threat to “show his face” is not an empty one, at all. 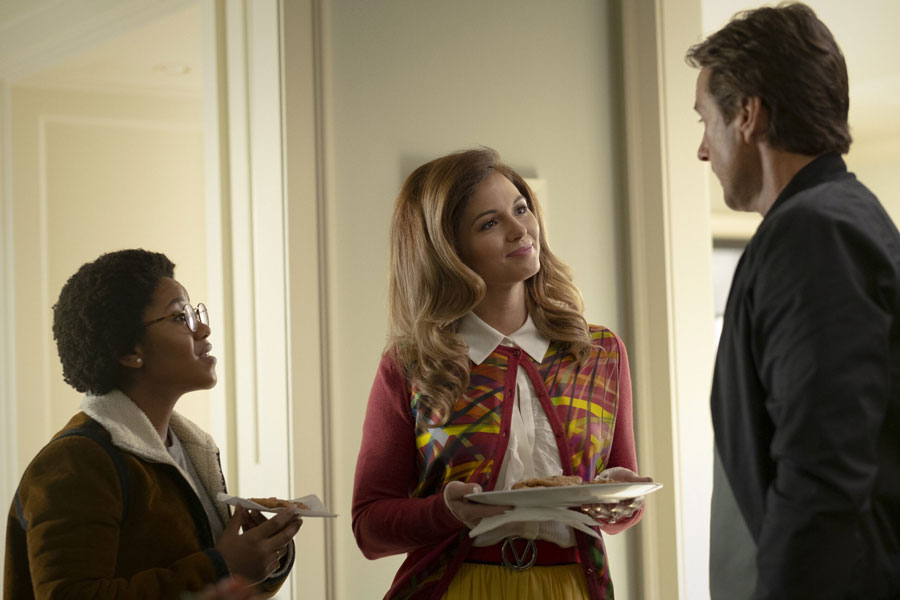 At one point, Pat pretends to be Beth’s father as they infiltrate Cindy’s home to do some recon. I found it weird that Cindy’s mom is, per Chuck’s goggles, unknown (possibly a clone of some kind or a robot) but yet she clearly has the hots for Pat.

There’s one more father/child motif in the episode, and that’s with Henry Jr. and his comatose father. Throughout the ep, Henry’s powers start to manifest and he begins to learn his dad’s true identity and if you’re keeping score, that’s four different father/child motifs. It makes all the sense in the world that James Robinson (creator of Jack Knight/Starman) has his fingerprints all over this show.

With all that said, the best part in the show is when Cindy shows up at Courtney’s house in the guise of being a friend, apologetic for the way she acted at the football game and attempting to actually connect with Courtney…

..then the bitch hits Court with the smoke and reveals that she knows she’s Stargirl. 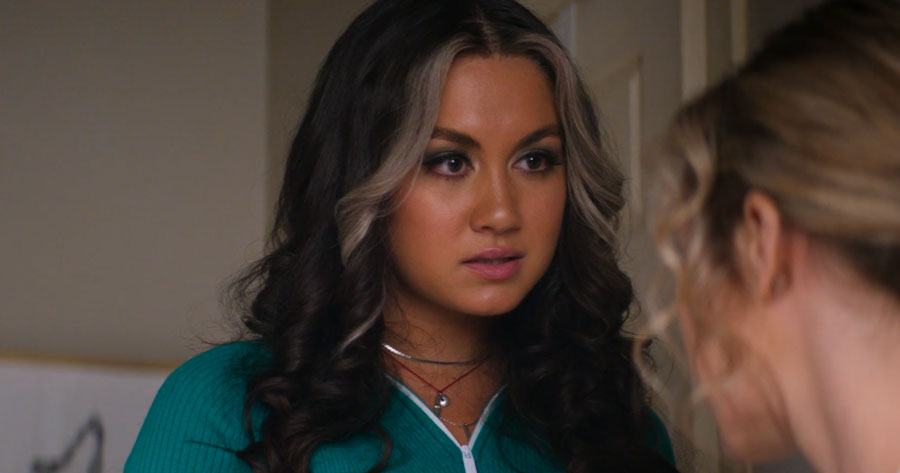 OHHHH SHIT IT IS ON!

And she had the balls to threaten her family! They have a rematch with Stargirl coming out on top. Sort of.

Henry kind of breaks up the fight and, with his newly manifested powers, also learns that Courtney is Stargirl (and, by proxy, that Cindy is a supervillain). There’s a lot of moving pieces in this ep (including Jordan taking out a CEO that built a school over a toxic waste dump after heavily flirting with Barbara), and normally…if you had a Beverly Hills 90210, you could juggle all these plots and subplots because, that’s kind of the whole point. 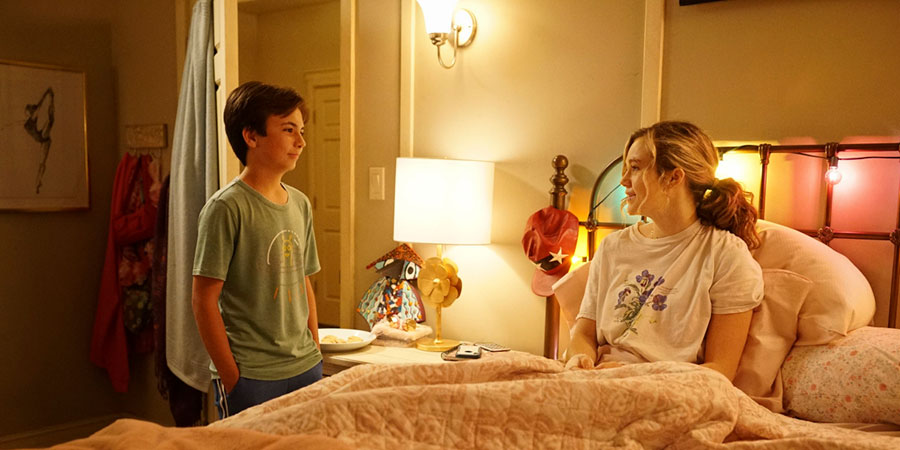 Throwing in costumes and superpowers can make it come across kind of melodramatic (in a bad way) and almost comical, but somehow they balance it all really well. There’s so much character development and it’s not cheap and thrown haphazardly (except for maybe Beth and Mike) which speaks well for the show’s future.

S1:E9 — Tensions rise among the JSA members after Courtney suggests who she wants to recruit next to the team. Meanwhile, Henry, Jr. makes a surprising discovery about his father.

“I think I killed a man tonight.” 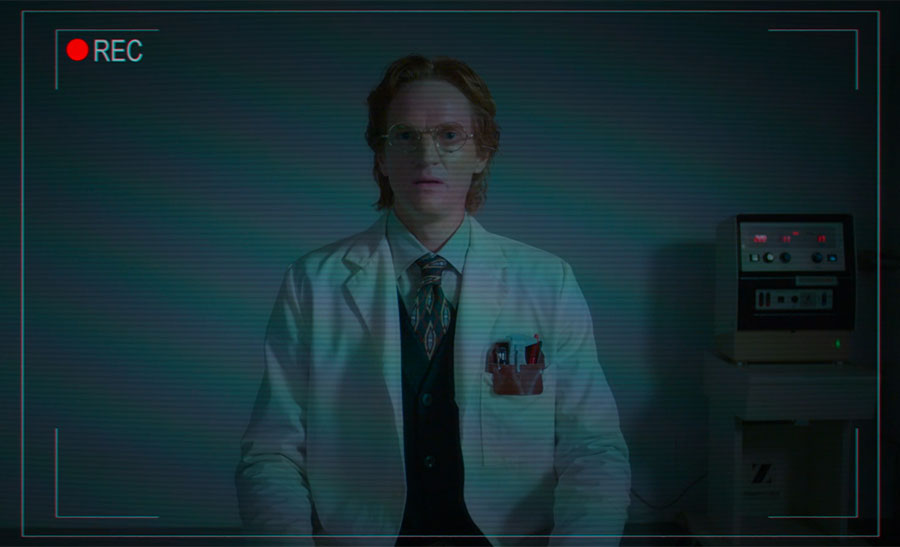 Know how I said there are a lot of moving parts?

This episode makes them crash into each other in such wonderful choreography. It starts decades ago, when Henry Sr. first manifests his powers and kills someone. This piece of information, video taped (we’ve seen those tapes in the secret closet in prior episodes), is now, in the preset, discovered by Henry Jr. Elsewhere, Courtney is trying to convince her teammates that, after discovering Jr.’s secret, maybe Henry should be their new recruit…which doesn’t sit well with Yolanda or Rick. Beth discovers (via the goggles) that Cindy and her mom have left Blue Valley (when in fact, she’s being detained by her father; mom is probably dead…again).

Cindy lets slip that she will kill her father (if he doesn’t let her out, but I’m telling you, I’m convinced that is her ultimate goal), Ito reveals that Henry inherited his father’s powers, and there’s apparently a mind manipulating machine that needs to be powered by a telepath, and I feel like as original as this show is, I’ve seen a supervillain using a mind manipulating machine recently…

Right, right right. Thanks once again, best adaptation that fanboys/gatekeepers hate. Moving on…

In the middle, the worlds begin to collide. Again, moving parts, but I swear, watching them move, all you do is wait for the crash. And they crash hard.

Courtney tries to convince Henry that there is good in everyone, and while she’s being a little naive, you can forgive that because she’s a hero. Yolanda, in her Wildcat outfit, attacks Henry and comes across as angry (rightfully so) but her inner thoughts reveal how deep his betrayal hurt her. Ultimately, Henry kills his father’s lawyer (who was trying to get him to sign papers to take his dad off of life support just so he’d get some bonus) in the EXACT same fashion that his father killed at the top of the episode.

Which wakes his father out of his coma.

But we’re not quite done yet because Barbara, you beautiful dummy, has invited the Mahkents to dinner.

Even though it happened two episodes ago, I forgot that Cameron asked Courtney out, so this is a bizarre confluence of sexual tension and secret identities. The Mahkents say a very pseudo-fascist Norwegian/Norse (Aryan maybe?) prayer, and Jordan’s parents say some disparaging things about Courtney in their native tongue.

However, the kicker comes when Courtney brings a hot dish of chicken and dumplings out of the oven and Jordan handles it…without pot holders. Immediately, she suspects the worst and normally, you’d think, “C’mon she’s not Batman,” and you’d be right, but think about what she’s experienced in Blue Valley so far; just about everyone she’s come across is a supervillain or a supervillain’s kid.

She’s getting a nose for it.

When she and Pat try to figure out a way to smoke Jordan out, Barbara discovers them holding the cosmic staff (in a funnier than it had any right to be moment). 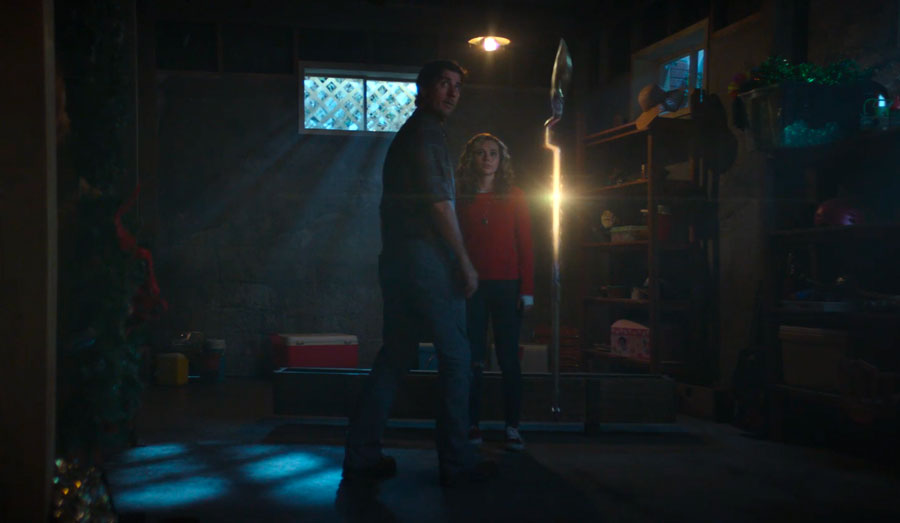