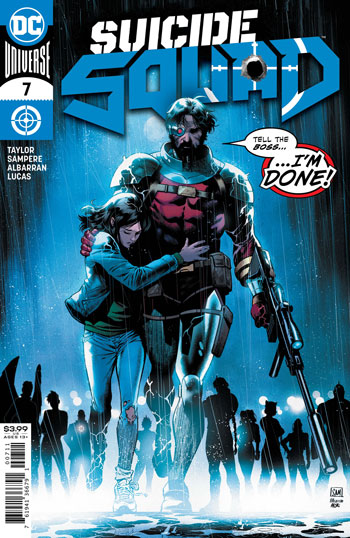 This has been a fairly entertaining run of books thus far.

Tom Taylor has been writing an adventure packed book and Bruce Redondo has been doing a great job on the art. I do hope they dig into some bigger and deeper storylines, which they are both capable of doing.

The opening scene takes place inside the Kord Industries Building. We get to see Ted Kord making a break for it. He seems terrified for his life and needs to get out of there. This is a nice intriguing set up for the rest of the issue.

From there, we get a nice change of pace.

We get to see Floyd Lawton (AKA Deadshot) going home to see his daughter. He tells his ex-wife that he has been released from the Suicide Squad program. It is a sweet scene that goes sour pretty quickly.

Floyd is attacked while visiting his daughter. There is a huge gunfight that erupts. It all leads into Floyd being extremely cross at the Suicide Squad.

Well, he forms another team to wipe out the Suicide Squad for good!

This is where the issue leaves off. I loved it.

This story is well done. It is a new direction that I haven’t seen before in a Suicide Squad comic. The story is a blast and the art is well done.

This is how I like my Suicide Squad comics. More please.