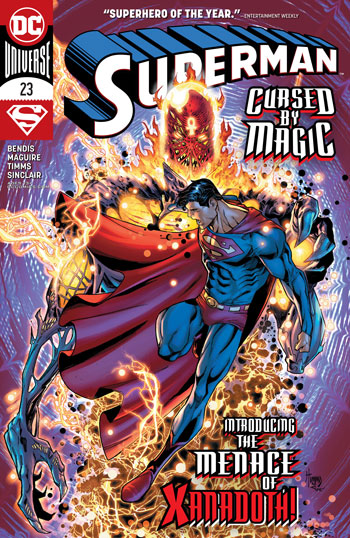 Just like the issue that preceded it, the best part of this issue is the Kevin Maguire art.

Maguire is one of the best artists this medium has, and he proves it again here. This is a nicely illustrated comic book. Too bad that the story of this book is completely lame.

The book starts off with the heroes of the world wondering if perhaps Superman was duped into revealing his identity to the world. It does seem a bit shocking that he did it. It also seems to some of these that maybe it was part of some bigger and more sinister plan.

So, Superman makes his way over to see Doctor Fate.

Superman is vulnerable to mysticism after all. And who better to investigate all of this?

So, after a brief glimpse of the Wonder Twin, Superman has a meeting with Doctor Fate. Immediately, I disliked the take on the character that Bendis writes.

Things get a bit too jokey.

A villain appears and starts a battle with Superman and Fate. I started to tune out as it all became so rote. I love Doctor Fate and I was hoping for something cool to happen with the character. Sadly, it all ends up being very basic.

I feel bad because this was yet another missed opportunity.

Doctor Fate is such a rich character that maybe Maguire can team up with another writer and get a better take on the character. The book ended and I could hardly care at all.

Maybe it is time to put this storyline to rest.