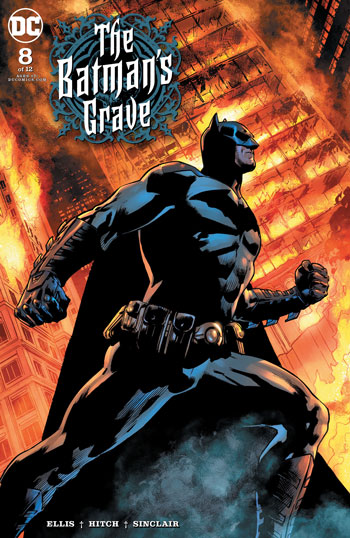 The individual heading up the war against the criminal justice system in Gotham City emerged from the shadows.

One would say Batman is facing his own shadow. A similar tragic origin story, same pathology but different ideologies

One kills, and one doesn’t.

Alfred has served as the constant reminder to Bruce that he’s not going to live forever and will probably die sooner if he continues his crime-fighting ways. The similarities between Batman and his newest rogue gave Alfred another bullet in the chamber of caution towards his friend.

Warren Ellis has let Bryan Hitch do a lot of driving in the last few issues. Here, we’re back to a delicate balance between the two creators.

While the plight of this new killer didn’t stay unnoticed, they managed to inject some great humor that tied in with Alfred’s constant concern for Bruce. Their banter about whether drones are shaped bats or hounds ended in a manner that will make any Batman fan smile. Hitch’s visual contribution provided a humorous answer.

Commissioner Gordon appeared to have made a surprising decision that goes against his strict moral code. Perhaps, it’s a bait and switch considering the scene ended before the proposed act occurred. It would be a shame if Ellis leaves this plot point hanging because an answer, no matter how it might unfold, would augment police officers as narrative targets.

Overall, the momentum is picking up as new elements are continuously well-executed to produce the desired result.