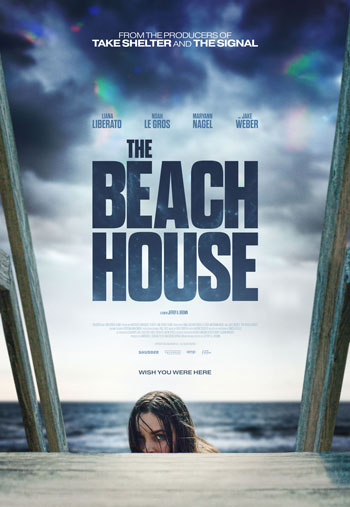 A young couple whose relationship is on the rocks hopes for a romantic getaway at a beach house owned by the young man’s dad.

Their idyllic reconciliation is thrown a curve ball by the unexpected arrival of an older couple.

Friends of the dude’s pop, Mitch (Wendigo’s Jake Weber) and Jane (Maryann Nagel) are more than happy to share the house with their college-age cohorts.

The four spend a nice evening dining, drinking and eating edible marijuana.  Things take a turn for the sinister, alas, as they step onto the porch and see a beautiful, mesmerizing glow in the air.

It appears to be that the glow is actually airborne microbes – sea life now migrating to land.

While lovely to look at, the results ain’t so great for our heroes.

The first half of The Beach House is a slow burn, while the second half kicks into higher gear once the proverbial s**t hits the fan.

The acting is uniformly good, the writing is mostly fine, the direction solid (it should be noted that the location chosen is quite appealing – no surprise, as director Jeffrey A. Brown is also a location manager).

It does have the increasingly prevalent (and annoying) cliché of a main character having an interest/background/education in the upcoming events and then doing very little with that tidbit.

Emily, the young lass, intends to go to grad school to study deep sea life. So, of course, her knowledge and fascination with this strain of biology will come into play, yes?

With all of its flaws, The Beach House still delivers. There are some truly icky body horror moments and the film becomes atmospheric and creepy in its second half. There is an especially horrific moment in the basement of a neighbor’s house that leaves a mark, and the film ends on an unsettling note.

So, a minor film, to be sure, but a rather effective one with some haunting imagery.

The Beach House is Now Streaming on Shudder.