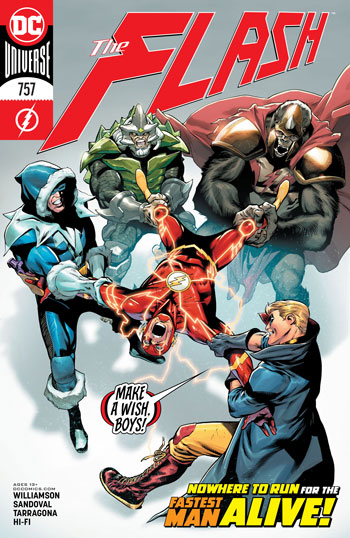 We are sadly racing to the end of series writer Joshua Williamson’s run on this title. But it looks like he decided to go out with a bang. He has kicked this book into overdrive and now we are headed quickly to the finish line.

But man, what a finish it is looking to be!

The opening splash page is Barry Allen as the Flash snapping the Reverse Flash’s neck.

It is one hell of a hook to get you into the issue.

From there we bounce around a lot through the timeline. It gives us a bigger picture of Williamson’s run up to this point in the series.

It shows a lot of stuff that happened behind the scenes in the run thus far. We see everything from a Rebirth scene to stuff deep in Barry’s past.

It shows the entire span of Barry’s life. It is all very intriguing and leads to something bigger.

We get to see Zoom creating his own league to stop the Flash. We get to see him gather the Trickster, The Turtle, Captain Cold and Grodd into a team.

It is a bunch of setup for sure but it is interesting and doesn’t bore.

All the players are in place. The battlegrounds are set.

It is now time for Williamson’s final act on this title.

It is sure to be a doozy.