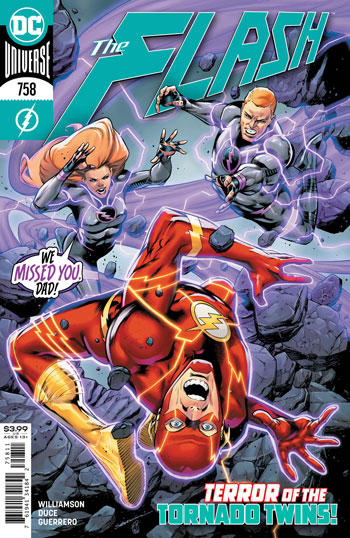 This book has been even better than usual.

The next incoming writer on this comic really has their work cut out for them. This has been an extremely solid book for the last five years and it has been super entertaining.

The opening of this issue shows the aftermath of an attack on Central City.

It is a pretty gruesome scene.

We then get to see the Flash family race to the rescue! They survey the damage and make some assessments. Barry realizes that this is all leading to something bigger.

Barry has a conversation with his dad. That is one of the highlights of the issue.

The other highlight is seeing Zoom and his group of rogues that he have gathered together as a team. This scene is particularly chilling to see.

The Zoom scene is illustrated by Christian Duce and he has never been better than he is in this scene. This sequential art actually stayed with me after finishing the read. As the book goes on, Barry eventually comes up against these rogues. He even comes up against Zoom himself!

The last two pages are pretty shocking as Barry comes up against some familiar faces from the past. These characters are supposed to be dead. What is going on here? I loved the cliffhanger.