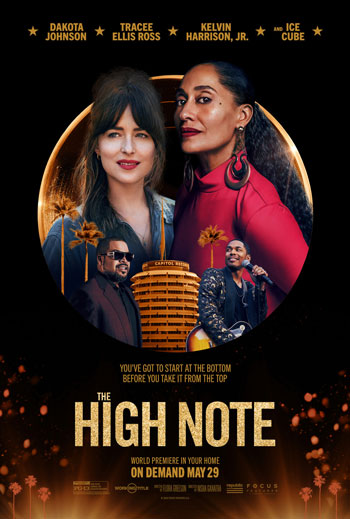 Superficial, kinda artificial, but quite entertaining music drama, with Diana Ross’s daughter killing it as a superstar diva.

Dakota Johnson (herself the offspring of major stars) plays Ross’s personal assistant, albeit one with an agenda – and a wealth of talent as a potential producer.

She and her boss share an at-arm’s-length friendship and bond, as long as Dakota doesn’t cross that line.

She’s been toying with some live tracks, tweaking the levels, audience noise, etc and is itching to tell her boss about it, much to the chagrin of her boss’s manager.

Said manager is played by Ice Cube, who is terrific as always. Unsurprisingly, he plays the role with a knowing (and welcome) wink, while consistently keeping it real.

Dakota is also good, if at times a bit opaque. She opens up here and there, especially with her love interest, a charming Kelvin Harrison, Jr.

And here is where the good and the bad meet.

The film is never dull, completely entertaining – and colossally contrived.

I’ll say no more, but if you’re looking for depth and/or realism, do look elsewhere.

The clichés and coincidences are piled on shamelessly in the second half of the picture, to the point where I chuckled more than a few times.

Still, I also was involved the entire time, never laughing derisively. The High Note is almost akin to an old 30s-era rags-to-riches melodrama, and we could use some of those.

On a truly negative beat, there are some dumb attempts at comic relief and sometimes the swipes at the cold-hearted music biz are cartoonish.

But on the plus side, the location work is terrific (many of the landmarks are in my hood, full disclosure), it’s beautifully shot, and it got me a little verklempt at the end.

The High Note is now available on Digital HD and on Blu-ray/DVD B/11th.