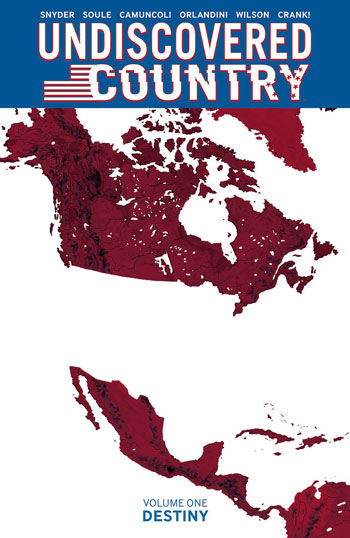 Have you ever enjoyed something so much that it’s difficult to put into words how good it actually is?

Undiscovered Country is an example of such an experience. The best way to describe it is a political thriller and a sci-fi epic had a baby, and that baby turned out to be Max Max: Fury Road on acid. Nationalism, espionage, disease, time paradox, and mutant shrimp being large enough to ride encapsulates on the surface what Scott Snyder and Charles Soule have conjured up.

This graphic novel collects the first six issues of the series and journeys into the future where the United States of America has sealed itself off from the rest of the world without warning.

No one has heard a peep from America for 30 years until the world received a message that seemed too good to be true. A team entered U.S. borders, in search of a cure for the world ending Sky Virus. What they found is unlike anything they possibly imagined, and a fight for survival ensues. The two main characters are a brother and sister duo, Charlotte, and Daniel Graves, whose family history played a pivotal role in the events thus far. The other characters on the expedition team round out a lineup that is a powder keg of endless prospects.

Snyder and Soule effortlessly weave in each character’s backstory alongside the current proceedings. For example, getting to know uncompromising journalist; Valentina Sandoval provided great character depth throughout the book.

Snyder and Soule penned a timely release sharing contemporary themes of the world we currently occupy.

A global pandemic, staunch patriotism, and divisive political views served as the background for this new world that never really recovered from America’s absence. Don’t worry, there is no hidden agenda, or personal politics pushed upon the reader. The societal elements presented in the narrative are very much a product of a future in shambles. It’s quite fascinating to see an indestructible Uncle Sam square off against super-powered madman dressed as an astronaut wearing electric antlers. All while yelling political rhetoric such as “Live Free or Die” and “This Land is My Land” seems silly in the face of a dystopian hellscape.

That is how deep these issues run for some people. In addition to all of the craziness lies several plot points that enhance the narrative, making each chapter more desirable than the next. The book is chock-full of extra material that connects some of the dots while giving the reader a better understanding of the world they’re experiencing. The repercussions for those hindered by America’s sudden closure are expressed from a multitude of views that will quickly make one think, “What if that happened to me?”

A timeline of events leading up to America sealing itself off from the world along with a letter from Scott Snyder describing how he and Charles Soule came up with the concept of Undiscovered Country provided a lot of must-read background material.

Giuseppe Camuncoli’s artistic talents, along with the superb coloring of Matt Wilson, illustrated a unique world that is consistent as it is gorgeous. Ridiculousness such as giant sea stars ridden like a horse had a dream-like quality that doesn’t detract from the overall seriousness of the story. Lettering by frequent Snyder collaborator Crank! worked well with a plethora of stunning visuals.

Secrets, conspiracy, conviction, and heroism, are all packed in as the creative team produced an outstanding synergy of storytelling. Some of the burning questions are answered while others remain a mystery. New issues are presented, and it’s easy to have faith that the wait for answers will be worth it.

The hype around this series is justified!