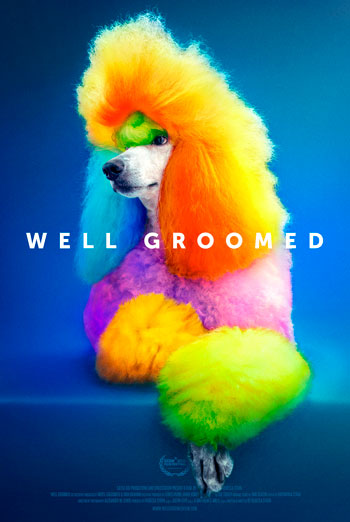 Entertaining niche documentary follows a handful of hopefuls as they compete in the world of creative dog grooming.

The film introduces us to several contenders, some seasoned, some green, and from different areas of the U.S.

There’s the veteran, Adriane, who is well-respected by judges and peers alike, but has yet to win the elusive top prize at the world championship in Hershey, Pennsylvania.

At the other end of the spectrum is newcomer Nicole, who has just become a small-business owner – of a dog grooming shop – and who feels she’s talented but is eager to learn more from the pros.

There are others as well, and they each have disparate tastes but share a passion – in some cases lifelong, in others temporary – for sculpting elaborate designs into their dogs’ fur.

These designs run the gamut from making up their canine to look like a ram or a chicken to fashioning characters and creatures from Pixar, Marvel, fairy tales and Jurassic Park into the dogs’ coats.

These women love the imagination, craft and creativity involved, and enjoy the actual competitions as an adrenaline rush, but also as a space where they can be around many people who share their passion.

Indeed, the many scenes at the contests look a lot like other niche conventions, with classes throughout the weekend as well as multiple booths set up in the arena selling their grooming goods and dog-related items.

We get glimpses of how the ladies’ passions affect their families and loved ones.

It’s nice to see that they all seem to have a decent support group, even if they don’t all share the same level of enthusiasm.

While the contestants’ fervor is somewhat infectious, this zeal is contested in a short but very interesting section which examines whether or not the creative grooming is good for the dogs themselves.

We see women on the Queen Latifah show, others talking with Anderson Cooper, etc. about whether it’s all about pleasing the groomer at the expense of the dog’s comfort, or whether the dogs tend to like it, as being multi-colored certainly garners them a lot of attention.

The film culminates with the Hershey competition. To the film’s credit, the climax is genuinely suspenseful and touching.

Obviously, Well Groomed isn’t a film for the masses, but if you like niche docs – even if you don’t have a major love for dogs – chances are you’ll enjoy this slice of Americana.

Well Groomed is available now on DVD and On Demand