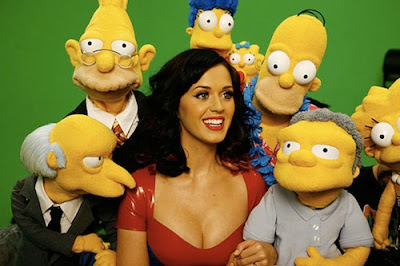 Parents’ outcry may have gotten Katy Perry’s breasts canned from Sesame Street, but it only created a national conversation about her cleavage — so much so that a former adviser to President Clinton had to interview a puppet about whether she’d get another play date on the program.

Now Perry is set to go from Elmo to Moe with a guest spot on The Simpsons. Perry will play Moe’s girlfriend as the Springfield crew sing “The 39 Days of Christmas,” Entertainment Weekly reports.
In case you missed it, Perry laughed off the boob-haha this weekend on the season premiere of Saturday Night Live. She appeared on a “Bronx Beat” sketch as a teenage girl getting some undue attention reading to kids at the library, and something tells me Sesame Street may have been better off with the showgirl outfit.
Is it funny? Not really, other than Amy Poehler’s quip, “The kids come for the boobs, they stay for the books, everybody wins.” Perry bounces her way onto the screen at about 3:12 into this NSFW-ish video after the jump.

In this article:Comedy/Parody, Television, Written by Marvin C. Pittman