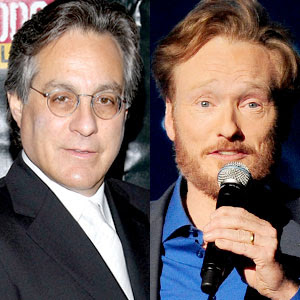 After months of rumors and denials, it’s been confirmed that Max Weinberg will not return alongside Conan O’Brien as bandleader on his new TBS show, Conan, premiering Nov. 8.

Guitarist Jimmy Vivino tells St. Louis’ The Riverfront Times that he’ll assume the bandleader gig permanently, and James Wentworth will take over the drums. Not much of a surprise, given that Vivino and Wentworth did the same whenever Weinberg was touring with Bruce Springsteen and the E Street Band, and they most recently were in action on O’Brien’s nationwide tour.

Vivino breaks it down after the jump.

“I’ll be leading the band, and James Wormworth will be playing drums now. He played half of The Tonight Shows and a good quarter of the Late Night shows. The funny thing was, when we got this gig, James was the only one we had to leave behind, you know, ’cause Max [Weinberg] got the gig and we didn’t need two drummers. But basically we took the band that was mine and my brother’s [and] combined [them] with some of the guys from Southside Johnny’s band that Max knew and it worked. It worked great for a long time. Now, we’re staying in L.A. and I’m committed to that now. It feels different than when we went out and tried to continue the New York show, because now we’re disassociated from one network and starting up with a new one. It’s gonna be great.”

So what’s Weinberg up to? Besides his times with The Boss, Weinberg is keeping busy with his big band. Check it out for yourself.