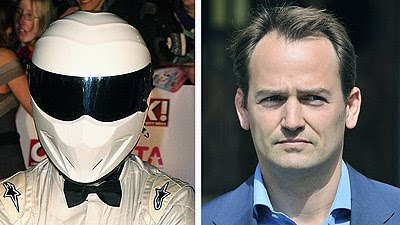 He’s always behind the wheel. He’s always driving those glamorous cars, putting them through their paces on the racing track. He’s always behind that white helmet, always unknown: Top Gear‘s anonymous The Stig.
The identity of The Stig is a closely kept secret, but the BBC has been refused an injunction blocking publication of a book revealing the driver’s identity. And it looks like Top Gear may have to find a new man behind the visor.
HarperCollins unveiled The Stig as 33-year-old racing driver Ben Collins in the upcoming book, which will be published in Britain on Sept. 16. It says on Collins’ website that he raced in Formula Three and NASCAR circuits, and drove James Bond’s Aston Martin in Quantum of Solace.
The BBC says it sought the injunction to protect the mystery surrounding the driver’s identity, making the show more fun to watch. Speculation over his identity is a pastime for fans, plus a moneymaker for Top Gear — from “I am The Stig” T-shirts on the show website to The Stig’s Facebook page picking up 2.5 million “likes.”
Top Gear is likely to recover from The Stig’s unmasking. Collins is the second Stig; the first was Perry McCarthy, who left the show in 2003 after his identity was revealed