I had a whole different subject in mind for this column.

You see that book there on the shelf?

I was planning to review that, and then there’s the graphic novel I’ve just been sent to me, it needs reviewing too. But then, yesterday morning, a dvd I’d ordered came through the post.

We watched it last night, and my first thought afterwards was ‘I have to write something about this’.

And here it is.

The dvd was Hitler Moustache by the comedian Richard Herring. 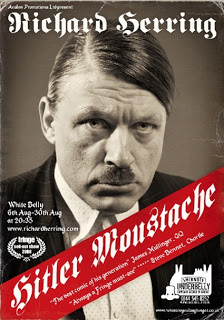 Now, I know what you’re all saying now: who the hell is Richard Herring?

Well, let me enlighten you.

Richard Herring is, as I said, a comedian. He started off, many years ago, in a double act with Stewart Lee, another comedian I have mentioned previously here, who has in recent years developed into arguably the finest stand-up in the world. I say ‘arguably’ because this is, of course, the internet, and arguing is what we do here- between bouts of pornography and Star Trek, that is.

Herring is notable for a number of reasons.

One is his blog, which he has not failed to make a daily entry on in something like 900 years. The fact that I haven’t posted on my own for almost a year makes me feel even lazier than I usually do… In fact his general workload is nothing short of astounding. As well as co-presenting a BBC radio show at the weekends, he also produces a podcast with fellow broadcaster Andrew Collins which, as is the nature in podcasts, is of variable quality but is always worth a listen.  On top of that, his other podcast series AIOTM or As it Occurs to Me, is an hour long topical sketch show that is written by Herring and recorded by a small cast and released free for download.

That’d be enough for any sane man, you would think.

But he’s also currently writing a series for BBC Radio and about to embark on a national tour with his latest stand-up show. And I haven’t mentioned that he had an autobiography out this year too… Actually- a quick mention of that book. ‘How Not to Grow Up’ is basically a memoir of his fortieth year, and is spectacularly good.

As any writers out there know, we use events from our own lives as emotional hooks to inform and help describe and add depth to the things we write. But the honesty of Herring in this book, describing as he does his highs and terrible lows, is incredibly brave.

All of which was a nice way to fill 400 words or so, but on now to the main reason for of this column.
The Hitler Moustache. 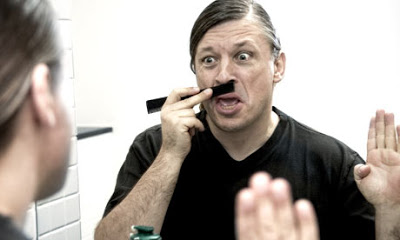 Or, more accurately, as Herring reminds us, The Toothbrush Moustache.

Charlie Chaplin had it first, so Herring is on a quest to reclaim it for comedy!

To that end, he spent many months living with the moustache- would it, he asks, turn him evil..?

Now, I’m concerned that what I’m about to write about this performance will leave you with the impression that it is not funny. But please be assured that it is very funny indeed. Herring delivers an almost constant stream of home runs as he touches on many flashpoints in and around the subject of racism, including the oft misquoted ‘Maybe racists have a point’ routine.

Here, Herring begins with this audacious line, and in the next few minutes takes us on a thought provoking (and very funny, remember!) trip in which he disassembles what it means to be racist and leaves the listener examining their own conscience.  This is something Herring does repeatedly throughout the 85 minute set. Time and again I laughed at a line that was at first utterly outrageous, but then the follow-up joke had me both laughing and thinking ‘Oh that’s clever!’

And as if the show itself was not enough, the dvd package is bulging with extras, with the two disc edition boasting 180 minutes of extras. A third disc is (or was at the time of writing) available if you order from Go Faster Stripe which you’ll find another three- yes three hours of additional extras!

Mmmm… reading this back it sounds like a massive ad for Mr Herring and his career, but it’s not, I promise! I don’t know the man, I am merely someone who was floored by the intricate, multi layered, controversial, rude, sometimes tasteless, thought provoking and utterly hilarious performance he gave in my living room last night.

If you can buy this dvd- then for god sake buy it!