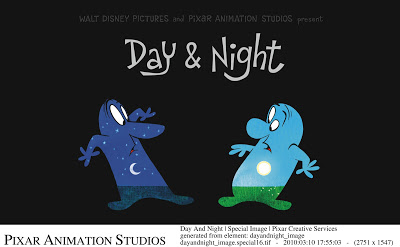 In July of 2000, Newton reunited with Bird at Pixar to work on Pixar’s sixth feature film, The Incredibles, and has since contributed his considerable character design skills to many of Disney•Pixar’s award-winning feature and short films, including Ratatouille, Your Friend the Rat and Presto. He was also instrumental in the creation of the End Titles of The Incredibles and Ratatouille and is frequently cast as a voice in Disney•Pixar films, including the role of Chatter Telephone in Toy Story 3, which hit theaters on June 18, 2010.

On Tuesday, November 2nd Day & Night comes to both DVD and Blu-Ray as part of the Toy Story 3 release.  Teddy took some time to discuss his directorial debut.

How did you develop the idea for “Day & Night”?

When coming up with the idea I just wanted to make sure I made a distinction between Day ideas and Night ideas. So Night would have a moon, where Day would have a sun. Day would have a rainbow. Night would have fireworks and, you know, it would keep going like this. I was just laying out drawings with these little distinctions within them and once I had enough drawings I could see a connection between what is going on with these pictures that makes the story. And it really was about differentness—that’s the main theme I started to play with—how do they relate to each other and how do people respond to something that is new and different.

“Day & Night” is created using both traditional and computer-generated animation—why the combination?

I wasn’t sure we would make a hand-drawn picture at Pixar, so I thought I could compromise and do part of it with hand-drawn characters as well as some CG elements. That’s really where it started. I initially thought of it completely as a 2D project but with all this new 3D technology that people have been playing with around with here, I thought this might actually get more dimensional.

How did you approach the hand-drawn aspect of the film?

Well, a lot of people at Pixar do draw and they draw really well, but they haven’t done it in a long time. Especially in animation, there’s no need to do drawn animation at Pixar for most pictures until this one. So it was great to bring out a lot of the guys who maybe hadn’t done it in 10 years—it was invigorating for them to get back to the erasers and pencils.

How did you incorporate 3D into the film?

We wanted to use the 3D in a way that reflected the story, so when the characters are introduced the 3D is quite conservative. It’s almost as if we’re using the 3D to show how deep they’re looking into the other and once they start to actually get interested in one another you’ll notice the 3D actually starts to get deeper, as if they are looking deeper into each other. And I think that’s kind of a fun idea just visually to play with that kind of teams itself with the story line.