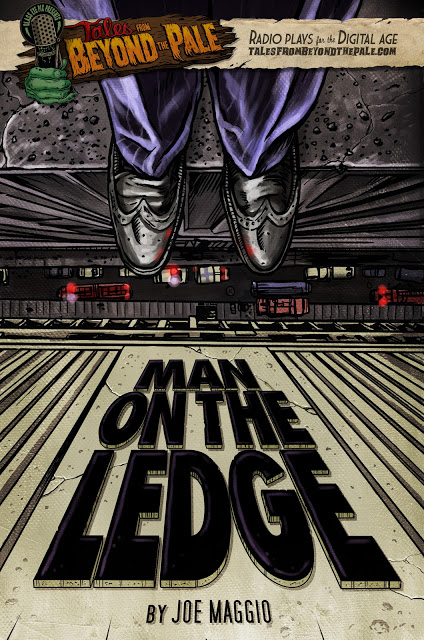 Earlier this week, FOG! told you all about the new audio series, Tales From Beyond The Pale.

Joe Maggio has written and directed several films, including Bitter Feast, Paper Covers Rock and Milk and Honey and is the creative force behind the first episode On The Ledge.


FOG! had the opportunity to discuss the project with Mr. Maggio.

How did you get involved with Tales Beyond The Pale?

Early in 2010 I made a film called BITTER FEAST, which Glass Eye Pix produced. I’d known Larry Fessenden for years from the festival circuit and as fellow New Yorkers with a slew of mutual friends. So I think I was sort of fresh in Larry’s mind when he and Glenn began casting about for people to do the radio plays. When Glass Eye, and Larry in particular, gets excited about something, as he was with these radio plays, I’ve found it’s always a good idea to jump on board because they really do a fine job and put their heart and soul into it, which is what every writer/director dreams about in a producer.

Tell me about your episode MAN ON THE LEDGE.

MAN ON THE LEDGE was an opportunity for me to explore a lot of ideas that I’ve never been able to find a place for in any of my films. It’s also essentially one long scene, and as you may know, scenes generally can’t be so long in a film. I don’t know why this is so. But when I’m writing a screenplay for a film, if the scene runs over 5-6 pages, I know I’ve got to trim it back. In my radio play, I was able to really develop this one scene over the course of 30 pages. The scene begins by presenting the listener with a finite number of clues as to what is happening. A man is standing by a window talking to some newly-hatched chicks perched in a nest on the ledge. We hear street noise, sires, etc. and from this we draw assumptions about where he is. Little by little, I add more and more information, entirely through sound, and the scene grows and becomes more and more complex. As the scene progresses we learn more and more, and the more we learn the more we realize how wrong we were in our earlier assumptions.

Were you a fan of radio plays prior or did you research the medium specifically when you took on this project?

Radio plays were definitely before my time, but I was aware of the classic radio plays – the Orson Welles “War of the Worlds” broadcast from the Mercury Theatre on the Air series. When Larry and Glenn invited me on board I went online and found a site that has a great deal of the Mercury archive right there to be downloaded, and I listened to a whole slew of them. While I’m too young to have experienced radio plays firsthand, I am of an age where, in my teens, it was common to go out and buy an album, take it home, throw it on the turntable, don the headphones and lay down on one’s bed to listen to the album over and over again. That kind of active listening seems to be a thing of the past, with most people listening to music either in their cars or on their iPods on the subway ride to work. But I still do it whenever I get the chance, and discovering these Mercury Theatre radio plays was like striking gold. It’s my hope that TAKES FROM BEYOND THE PALE will foster the same kind of active listening.


You’ve written and directed several films. Did you find writing and directing an audio play easier or more difficult?

I found writing and directing the radio play far easier. On a film I worry about dozens of things at once. Does the wardrobe look right? What about make-up? Is the actor walking the right way? Does the blocking work? Is this location evocative enough? Is the crew hungry and getting ready to mutiny. If you’re outside – will the weather hold up? There’s just a lot less to worry about in the directing a radio play. You just sit back in a cozy little studio and listen intently. And with the cast that I had it was over in just a few takes. In fact, after we went through the entire play in little chinks, we did one take all the way through and it’s that take that provided me with at least 85% of the final cut. The writing was easier because again, I felt much freer to fully explore this really complex character (John Alba, played by Vincent D’Onofrio) without having to worry about what I needed to cut out. I allowed myself to just put everything in, to really let it all just pour out!

How did Vincent D’Onofrio get involved?

Larry and Glass Eye has done some work on a film Vincent directed, called DON’T GO INTO THE WOODS. When we sat down to discuss casting, Larry, Glenn and I agreed that we needed someone with some serious chops and Larry reminded us that Vincent had done that short film a few years ago (FIVE MINUTES, MR WELLES) in which he played Orson Welles, and then we learned that Vincent had actually done some radio plays for the BBC in London, so it all made sense in a cosmic kind of way. And then of course – it’s Vincent D’Onofrio! The guy has worked with Stanley Kubrick! A guy like Vincent can give you whatever you want. I mean, just look at the range of characters he’s played in his films. He’s like this finely-tuned sports car that can go as fast or as slow as you like and take all the twisty turns so you barely feel them. It was just the greatest pleasure working with him.

I’ve just finished a film called THE LAST RITES OF JOE MAY, made in conjunction with Steppenwolf Films in Chicago. It’s a drama starring Dennis Farina, Gary Cole, Chelsea Ross and a great many of the actors from Steppenwolf. It centers on the titular character, played by Dennis Farina, an aging short-money hustler who has always believed there was greatness waiting for him around every corner, but who now at the end of his life, is left dealing with a life of failure and regret, all the while struggling to maintain the kind of quixotic optimism that’s kept him going for so long.

I’m currently geeking out over Paul Newman and Jackie Gleason. I recently watched THE HUSTLER and was just blown away by both of them and it got me researching and re-watching the work of these two giants. I just bought the complete Honeymooners and am convinced it was the greatest TV show ever.