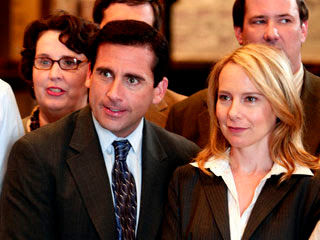 After teasing Office fans with a speakerphone appearance a couple of episodes ago, the Dunder Mifflin sitcom is set to bring back Amy Ryan in the flesh.

How long before Michael and Holly are back to having sex in the office building’s stairwell again? Is Holly as attached to that boyfriend in Nashua as she says she is? What hit songs will be butchered in a dork-tastic Scott-Flax cover?