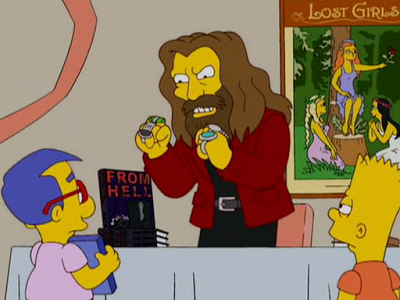 Considered to be the greatest writer of the comics medium, Northampton’s Alan Moore is celebrating his 57th birthday today, presumably in the company of family, friends and magical deities.

Moore (for those silly enough not to know his work) is the genius behind such work as Watchmen, V For Vendetta, From Hell, Lost Girls, League of Extraordinary Gentlemen, Marvelman, The Killing Joke, The Bojeffries Saga, The Ballad of Halo Jones, D.R. & Quinch, Promethea, Tom Strong, and Top Ten as well as seminal runs on Swamp Thing, WildC.A.T.S., Supreme, Youngblood and Superman.

Check out DeZ Vylenz’s documentary, The Mindscape of Alan Moore after the jump.