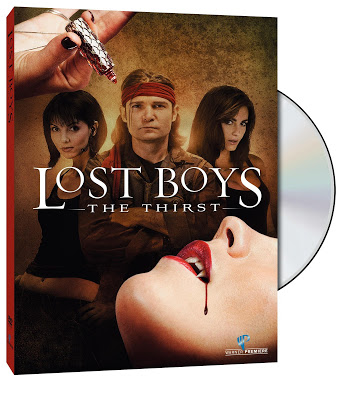 The Pitch
As the lost boys and girls of San Cazador prepare to party under the Blood Moon, an alpha vampire conspires to turn these unsuspecting ravers into an army of undead. The only thing that stands between him and the annihilation of the entire human race is the infamous vampire fighting Frog Brothers. Armed with double-barrel holy water balloon launchers and multi-arrow crossbows, Edgar (Corey Feldman) and Alan Frog (Jamison Newlander) join forces to kick some blood-sucker butt in this latest high-energy, action packed adventure in the Lost Boys franchise.

The Review
One of the nicest things that I can say about Lost Boys: The Thirst is that it’s only 81 minutes long.

It’s pretty rare for movies to have a petty agenda.  Lost Boys: The Thirst is one of those rarities.

In it’s 81 minutes (which was more than enough), the film bashes Twilight (more specifically, Stephanie Meyer), reality television (Mr. Feldman’s bread and butter for quite some time), and to a certain extent, Corey Haim, who’s character Sam is revealed to have passed away (despite a post credits appearance in Lost Boys: The Tribe) and who appears in “flashbacks” using footage to from the original film.

The story and performances are medicore at best, with poor CGI effects and unfortunately, Corey Feldman.

Don’t get me wrong.  I grew up watching the Fel-Dog.  In films like Stand By Me, Goonies, Gremlins, The Lost Boys and even Bordello of Blood, I’ve enjoyed his work.  The problem with his work here is that his character is nothing more than a bad impression of his character from The Lost Boys.  He grunts and tries to act tough, but instead of it coming from the mouth of an angry pre-teen, it’s  being delivered by an almost 40 year old man.  It’s ridiculous and the film suffers significantly as a result.  Extras include a featurette on the sexual appeal of vampires hosted by Charisma Carpenter.