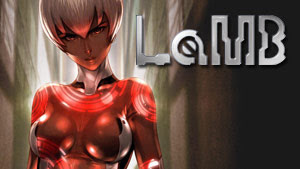 Looking for something incredibly cool to check out post-Christmas?

Launching on December 27th on Crackle is LaMB, the much lauded first original production from Animax Asia featuring a cornucopia of big-name acting and design talent who contributed the sleek style of the series which consists of the 42 minute telefilm and 22 webisodes.

The inhabitants of a harsh desert planet called Cerra have perfected a system of imprisonment without walls. Called “Lamination”, those convicted of serious crimes are placed in a suit to ensure criminals are productive. But if not free, the criminals become members of society in a system of virtual slavery.

They are hence called LaMBs.

The project is from an original script written by Carmelo Juinio, one of the finalists of the 2007 Animax Awards Pan Asia Animation Competition and features American Taiwanese-based singer and actor Vanness Wu voicing the role of Dr. Jack Griswold, Singapore radio host Petrina Kow voicing the role of Sara Integra and award-winning Hong Kong actress Josie Ho voices the role of Keiko Suzuki.  Music featured in the film is performed by the bands Simple Plan and The Click Five and if that wasn’t enticing enough, world famous fashion designer Vivienne Tam designed the dresses seen in the film, which were later made into actual dresses for promotional events across Asia.

After the jump, check out a trailer, the first webisode and a faux-PSA and be sure to check out the premiere on December 27th HERE!